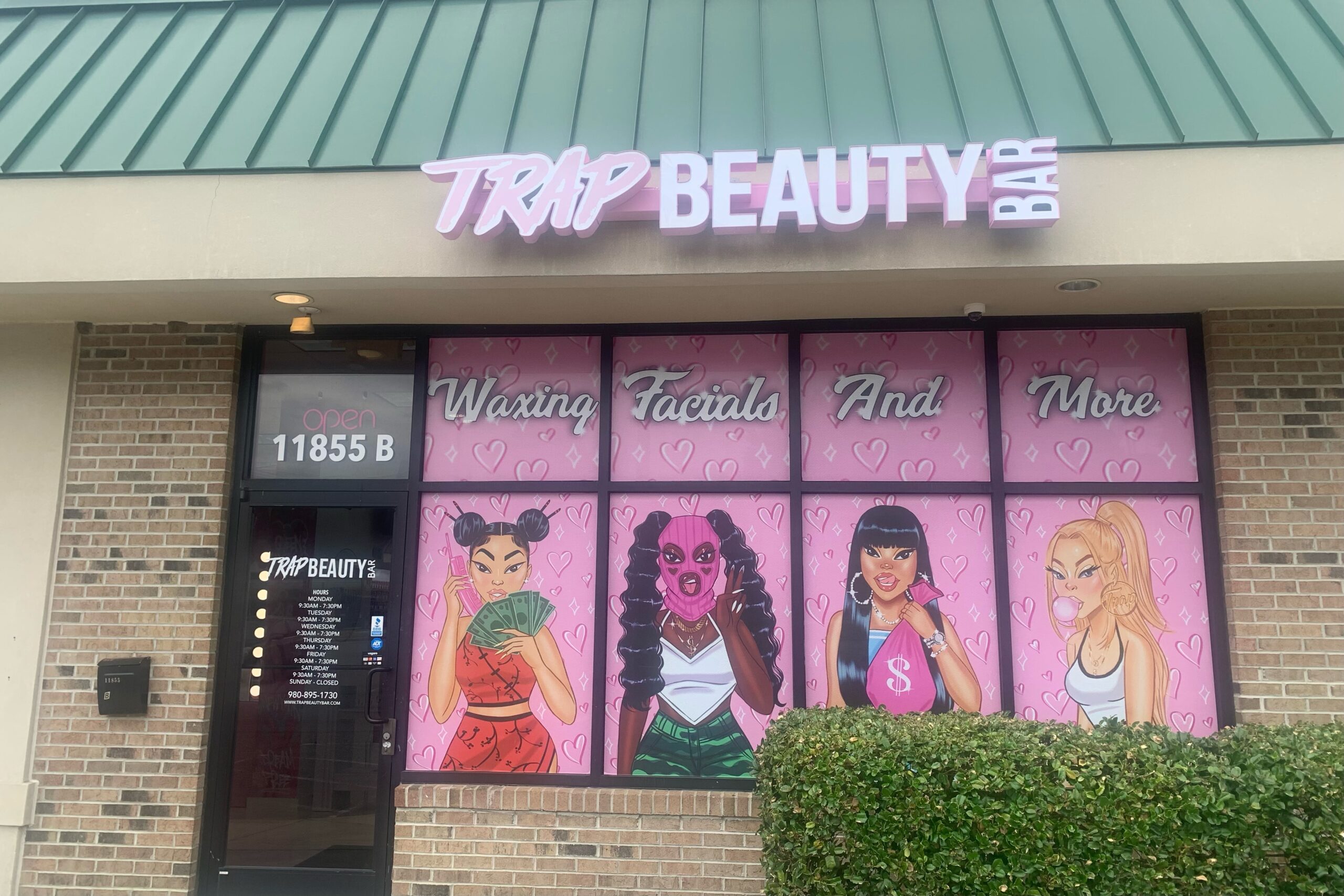 
Trap Beauty Bar, just a few months old, has grown to be one of Charlotte’s most popular salons, billing itself online as a one-stop shop for waxing, lashes, hair styling, makeup, facials and more. Now a viral video threatens to undo that success.

The video, posted June 24 and laced with profanity, has more than 2.2 million views on TikTok. It appears to show a former employee, Brielle Mcmillon, confronting the shop’s owner, demanding to know why she had been fired the previous day.

In the video’s background, another former employee, who also had been let go, can be heard raising allegations of unpaid wages.

Now, what began as an employment dispute has escalated into a fight with racial overtones and allegations of cultural appropriation – the shop’s owner, Christine Duong, is Vietnamese; her employees and clientele are mostly Black.

“While racism has no place on Yelp and we unequivocally reject racism or discrimination in any form, all reviews on Yelp must reflect an actual first-hand consumer experience (even if that means disabling the ability for users to express points of view we might agree with),” Yelp says in message posted to Trap Beauty Bar’s Yelp page.

Duong, who was born in Spring Valley, New York,, said the controversy has damaged her business, and she denies allegations of cultural appropriation.

Duong, 23, moved to Charlotte in May after failing to find commercial space she could afford in New York. She checked a number of available storefronts here and settled on her current location, 11855 N. Tryon St.

The shop’s interior is brightly painted – sparkling in pink and white – with images depicting young, Black women, hair flowing. Its website describes Duong as a “natural born hustler,” one who “never settles” – not the “culture vulture” she was called online.

Critics have noted, in particular, the name of her business and the trap music it plays. Some say Duong has used that theme to lure Black clients and to portray the shop as Black owned.

In a series of interviews with QCity Metro, Duong denied those allegations.

Duong said she grew up surrounded by Black friends and was immersed in Black culture long before she arrived in Charlotte.

“You can’t be mad that I’m a product of my environment,” she said. “It’s not my fault my parents decided to raise me there.”

Duong said she named the business “Trap” to reference “a bunch of females hustling and getting to the money,” a message repeated on the website’s “About Us” page.

Duong credits the shop’s sudden popularity to her use of video reels on social media. (One Instagram video shows celebrity stylist Jonathan Wright inside the shop.) Clients also helped by posting vlogs to their own social accounts.

Business was good, she said, until the viral video was posted and things “went downhill.”

“People don’t know me,” she said, “so they’re gonna judge what they see on social media.”

Duong said the situation “escalated more than it should have.”

She alleged that she was ambushed by the former workers who recorded and posted the video.

“When they first came in, the camera was in my face. If a camera is in my face, what am I supposed to say?” she said.

Duong declined to discuss the firings but said the former employees no longer aligned with her plans for the business.

“If I don’t feel like you really wanna go big with me, I feel like it’s okay to part ways,” she told QCity Metro. “I’m gonna still be rooting for you at the end of the day.”

Duong said the shop has gotten threatening calls, with some calling her racist. She said the former employees used race – “a very sensitive topic right now” – to paint the shop in a bad light.

Duong acknowledges that hers was never the public face of Trap Beauty Bar.

“I don’t use my own picture because I don’t like taking pictures,” she said. “I just had a baby, so I don’t really feel comfortable in my image.”

Tasha, Trap Beauty Bar’s hiring manager, who declined to give her last name, said Duong, like any boss, has had to make tough decisions and has gotten unfair backlash following the viral video.

“All she wanted to do was just provide an opportunity for ladies to come have a good time and see the culture that she was raised up in,” Tasha said.

Tasha said it was she, not Duong, who was responsible for the firings. She said each terminated employee knows why she was fired – primarily because of constant work-related issues, Tasha said.

“They refused to change, so we made a conclusion at the time that we were just going to let them go,” she said.

Some of the former employees who spoke with QCity Metro said they believe they were fired because of a surprise visit, on June 23, from the North Carolina Board of Cosmetology, which found an unlicensed technician working at Trap Beauty Bar.

The state board confirmed to QCity Metro that Duong was fined $500 for employing an unlicensed worker, who was fined $250.

Kyah Barsey, an aesthetician who was fired, alleges that Duong allowed at least five unlicensed employees to work at Trap. Only one was still there when the state board showed up, she said.

Barsey denied that any of the former employees called the state board.

“That’s like snitching on your friend,” she said. “We are all there for the same reason, and nobody was going to get in the way of that, especially not each other.”

A state board official confirmed to QCity Metro that the agency was tipped off about unlicensed workers, but the official declined to say called.

Duong acknowledged being fined for having the unlicensed worker but denied  having five. She said the state board’s visit had nothing to do with why the employees were fired.

Taylor, a nail tech who was let go, said she was “shocked” when fired via text message by the hiring manager. (Taylor asked QCity Metro to withhold her last name for privacy reasons.) On the day of the state board’s visit, she said, everything seems fine.

Taylor alleged that Duong had a history of poor management and was slow to address issues at the shop. A broken air conditioning system, she said, went unfixed for weeks, causing some clients to cancel their bookings.

Taylor said she asked Duong several times when the air would get fixed, which she believes played a role in her firing.

“As a boss, you take care of business, have things in order and take pride in your brand,” Taylor said.

“The AC was broken for like one week,” she said, “and it’s because my AC guy, he needed to order the part.”

Brielle Mcmillion, the former employee heard yelling in the video, said she decided to post the clip to expose issues at Trap Beauty Bar. After the filming ended, she said, police were called to deescalate the confrontation.

Mcmillion said money was another issue at the shop. To avoid payroll taxes, she said, Duong asked technicians to work as independent contractors.

She also alleged that Duong wanted employees to charge their customers extra to use online payment apps like Cashapp, Zelle or Apple Pay.

“It was just little stuff like that when people noticed she was trying to make money but really trying to take more of our money,” Mcmillion said.

Duong denied that she told employees to charge customers extra for online payments but encouraged them to use those methods to avoid processing fee charged by credit cards.

“This is a commission-based salon,” Duong said. “How much money you make is how many clients you take.”

Mcmillion, Barsey and Taylor have each moved on to other salons.

Duong said that as a first-time business owner, she made the mistake of not doing thorough background checks.

One former customer, Timasia Davison, said she doesn’t plan to revisit the shop after checking out the recent spate of bad reviews. But another customer, Aura Mata, said “every story has two sides.”

Mata called Duong a “great business woman” who always treated her with respect.

Three days ago, a new video went up on Trap Beauty Bar’s Instagram account, this time featuring Duong herself, who “for the first & last time,’ addresses some of the allegations leveled against her and the shop – including allegations of cultural appropriation.

Correction: An earlier version of this article misstate Christine Duong’s ethnicity. She is Vietnamese, not Filipino.