A sibling rivalry that goes beyond the home 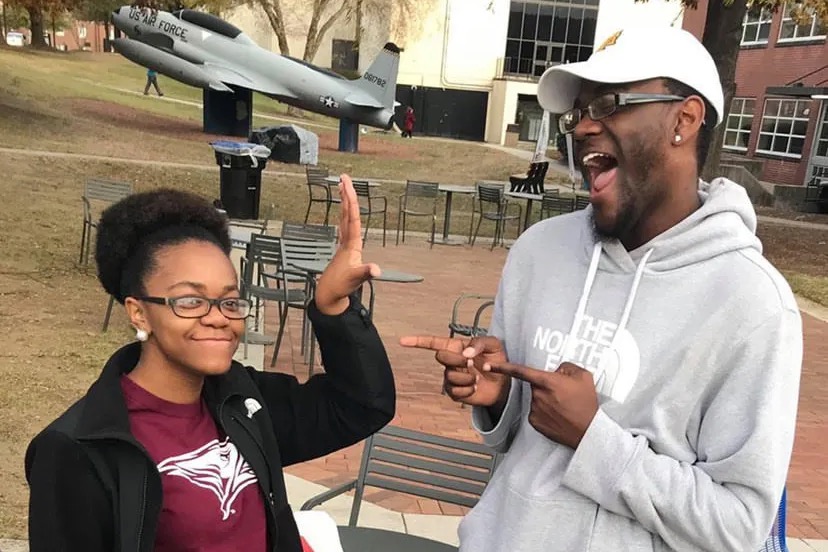 A sibling rivalry that goes beyond the home


Growing up in Raleigh, Gwyn and Derrick Daniels had always gone to the same schools. But in 2015, things changed.

“I was disappointed,” Derrick said of Gwyn’s decision. “She could have gone to any other HBCU, but she chose my school’s rival.”

The feud only intensified when football season came around. That’s when the trash-talking began. Derrick said his sister would antagonize him first.

“I would never bring up the game until she started with me,” he said

Both said they look forward to the Aggie-Eagle Classic being hosted in Charlotte this year.

The decision that started the rivalry

Derrick chose A&T because of its proximity to his home and his aspirations to become an engineer.

A&T, he said, was “the number-one HBCU with the best engineering program.”

Derrick, the first in the family to attend college, said his whole family bought A&T shirts in support of his decision. Gwyn, 23, he said, initially wanted to follow him.

She denied that claim, saying her interest in NC Central University began after touring the campus as a junior in high school.

“Every time I stepped foot on that campus, I just knew where I wanted to go,” she told QCity Metro.

After graduating from Word of God Christian Academy in 2017, she enrolled at NCCU that fall.

Gwyn said their parents have tried to balance their support by rotating paraphernalia from both schools but still they find themselves caught in the middle of the rivalry.

“I remember when my dad was helping me move into my freshman year dorm and he had an ‘NC A&T Dad’ sticker on his truck,” she said. “He definitely got some dirty looks.”

When the Eagles traveled to play A&T in 2017, Gwyn rode the student activity bus to the game. She sat in the Eagle student section at first but later took the risk and joined her brother.

“Me being an Eagle sitting in a sea of Aggies, it was obnoxious, especially because they were beating us,” she said.

“I was just excited to be at the game because that was the first event that we got to experience together at rival schools,” Gwyn said.

Derrick left the game with bragging rights but decided to keep the antics going that Christmas with a special gift for his sister.

Gwyn, for the next two years, had to endure her brother’s trash talking as the Aggies continue to win. While the two didn’t sit with each other again, Gwyn made sure to call her brother after the game to defend her school.

While the rivalry has provided them with sibling fun, the two have grown closer aside from the games.

“We have that sibling rivalry when it comes to our schools, but by being first-generation high school grads and first-generation college students, we definitely support each other,” she said.

Derrick said despite the game being in a neutral location this year, his alma mater has the advantage, being closer to Charlotte than NCCU.

He believes both sides will have plenty of support that weekend.

“Charlotte is big, so I think people are going to be coming from all over the state, all over the country, just to see the game,” he said.

Derrick can’t attend the game because of work but said he will Facetime Gwyn while she is in the stands.

“I got to get my trash talk in. It must be done,” he said. “I’m going to ask her to send me a picture of the score, but (she) probably won’t because we both know what the outcome is gonna be.”