A year after launching a mobile shower and laundry services for the homeless, Hope Vibes looks to expand 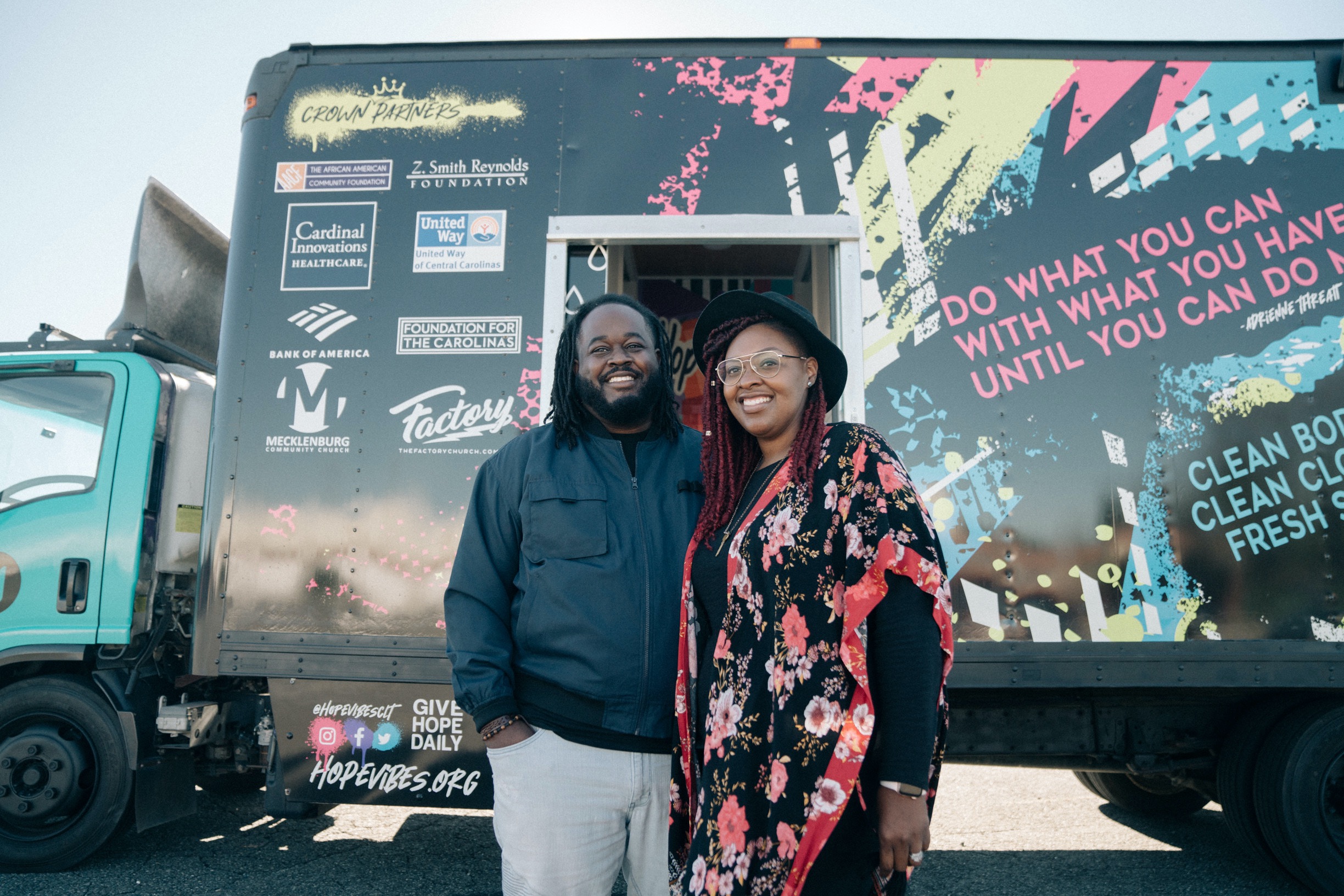 A year after launching a mobile shower and laundry services for the homeless, Hope Vibes looks to expand


It’s been 12 months since Hope Vibes launched its mobile hygiene service — the Hope Tank — to provide shower and laundry services to those experiencing homeless. Now hundreds of showers and wash cycles later, the Charlotte-based nonprofit is looking to expand.

Starting in 2022, Hope Vibes will take its mobile serve to Winston-Salem. It’s also in the beginning stages of erecting the Hope Vibes Innovation Hub, which will store and distribute donated clothing, dry food and feminine products.

Emmanuel Threatt, one-half of the husband-wife duo behind Hope Vibes, said the idea to expand to Winston-Salem came about after meeting a couple who lives there and wanted to help with their efforts.

“We’re all about building relationships,” Threatt said. “They have the heart of Hope Vibes, and they happen to live in Winston-Salem. We’ve taken some trips out there scouting the area, and we believe that’s where we need to go.”

The innovation hub is scheduled to be open by the end of the year. Threatt likened it to a “Second Harvest Food Bank of hygiene.”

Five-figure grants from Lending Tree and Starbucks will assist with getting the hub off the ground and expand the Hope Tank’s footprint.

Hope Vibes is also in the process of hiring its first employees — a part-time administrative position and a part-time operations manager.

“We’re looking forward to expanding the Hope Tank in more areas,” Threatt said, “having more impact in the lives of people, and seeing the smiles on people’s faces when they come out of the Hope Tank after having a good shower.”

“I know for a fact that even though it may seem small in scope, like, “Oh, it’s just a shower,” but for people who don’t get to take really good showers on a daily basis, it really does change their day, and it changes how they even see themselves when they come out.”

As of August 31, an estimated 3,149 people in Mecklenburg County were experiencing homelessness, 76% of whom were Black, according to county data. That number included 341 households, 2,047 single individuals, 126 unaccompanied youth and 202 veterans.

As of January 2020, North Carolina had an estimated 9,280 residents experiencing homelessness on any given day, as reported by Continuums of Care to the U.S. Department of Housing and Urban Development (HUD).

In Winston Salem/Forsyth County, the recorded number was 504 people experiencing chronic homelessness on a daily basis.

Numbers for 2021 are not yet known, but they are expected to increase due to an anticipated wave of evictions related to the Covid-19 pandemic.

Since launching the Hope Tank in October 2020, Threatt said, they’ve provided about 250 showers and washed 215 loads of laundry for people experiencing homelessness.

Though some who use the service may be temporarily housed, he said, essentials such as t-shirts, socks, toothbrushes, soap and feminine hygiene items are always needed and, at times, hard to come by.

“On a practical level, it’s a simple concept; you’re just giving showers and washing people’s clothes, but the Hope Tank is one of those things where it’s made to bring restoration,” Threatt said. “We were intentional about certain elements of the Hope Tank, so that it brings a sense of joy and self-dignity.”

“It’s a place where it’s colorful, and there are quotes in the inside of the bathroom,” he added. “People when they go in and they come out, they always kind of share, ‘like man I feel so much better. I feel like I had a piece of home.’”

On the second and fourth Saturdays of each month, the Hope Tank can be found in Uptown Charlotte at 616 N. Tryon St. On the third Thursday, it’s in Gastonia, at 258 W. Franklin Blvd; and on the fourth Thursday, it’s across from Northlake Mall, at 10130 Perimeter Pkwy.

Monthly, it costs about $1,200 to operate the mobile service, according to Threatt, not factoring in items such as water, laundry detergent and hygiene products, which are typically donated.

Hope Vibes wants the Hope Tank to operate daily, and it’s hiring workers to bring that vision to life, powered by a $50,000 grant from The Starbucks Foundation last month.

The funding is the latest of several grants that Hope Vibes has received from Starbucks over the past two years, according to the nonprofit. In July, Hope Vibes was awarded $9,000 through Starbucks’ annual Neighborhood Grants program.

“We are soooo thankful for the ongoing partnership we’ve had with Starbucks over the last couple of years. They not only provide coffee and sweet treats at our #ServeDay events on a regular basis, but they actually stay around and SERVE!” Hope Vibes said in a blog post.

In August, the nonprofit received a $30,000 grant from Lending Tree Foundation, which went toward securing a warehouse for Hope Vibes’ innovation hub in Harrisburg.

April Whitlock, the foundation’s executive director, said she was impressed by Hope Vibes’ ability to “completely pivot their business model” during the Covid-19 pandemic to provide additional support to the homeless community.

“We believe in their vision and are thrilled to provide them with these unrestricted funds to further their innovation and community impact,” she said.

Threatt said he wants the hub to become a place where ideas are generated and cultivated.

It’s also the site where the group’s second Hope Tank will be built, starting in January. Threatt, along with experienced volunteers in construction, electrical, and plumbing, will tackle the outfitting of the second truck, much like they did the first one.

The cost will be covered by a monthly donor base and gifts from individuals, corporations and foundations — funding which has grown substantially since the pandemic, Threatt said.

Hope Vibes isn’t the only organization in the Charlotte area providing the homeless with mobile showers, but it is the only one offering showers plus laundry services, which, Threatt said, has been a difference maker.

“The laundry piece is huge,” he said. “The washers and dryers have been just as much a resource that’s been used as the showers, especially with individuals who are experiencing homelessness. The clothes might be soiled or have been out in the weather. That’s 45 minutes to an hour per load, and that takes time.”

“So that in itself has allowed us to be different.”