Aggie-Eagle Journal: Our day-by-day journey though a landmark event 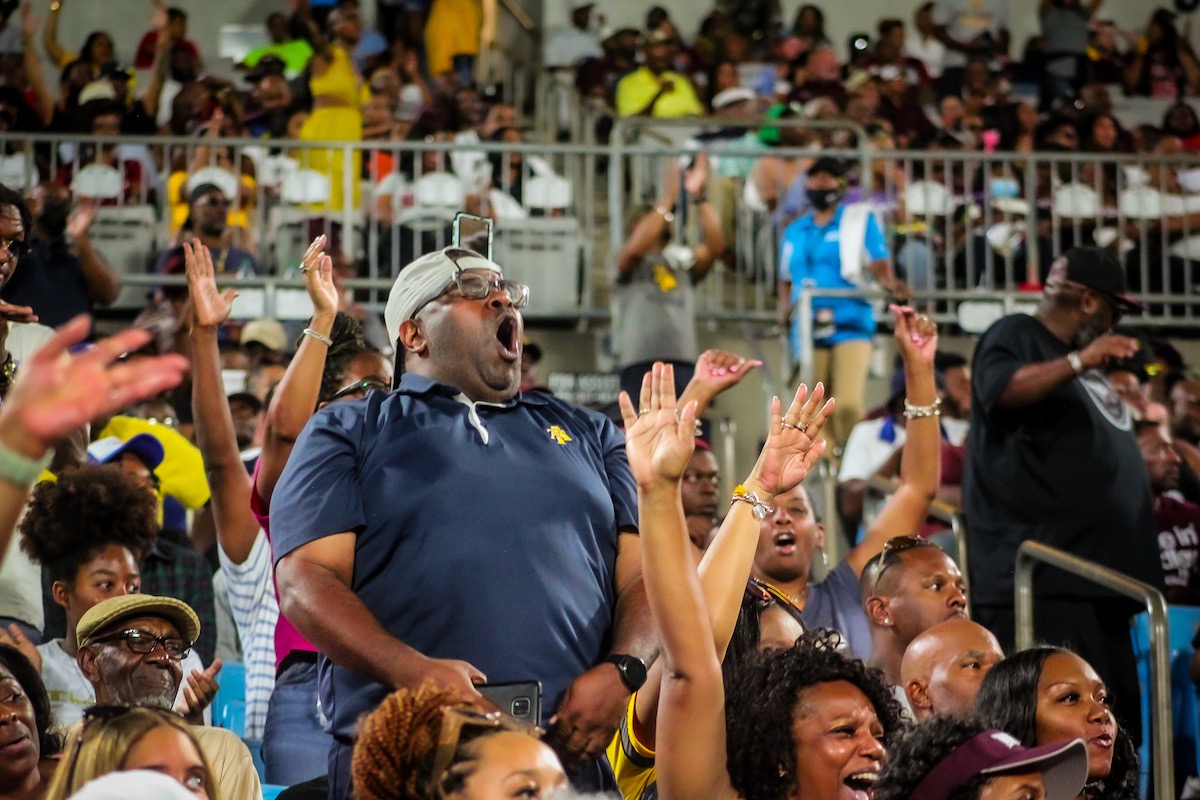 Aggie-Eagle Journal: Our day-by-day journey though a landmark event


Like thousand of HBCU fans who came to Charlotte for the Aggie-Eagle Classic, the QCity Metro team was kept busy last weekend.

We met some incredible people along the way, all proud of their affiliations with historically Black colleges and universities. It was HBCU culture at its best.

Making this year’s event even more special was the fact that the Aggie-Eagle rivalry marked its centennial year. (It should be noted that, after four straight losses, the underdog Eagles pulled off a decisive 28-13 win.)

The Charlotte Sports Foundation, which hosted the event as the Duke’s Mayo Classic, will bring the two teams back to Charlotte in 2027.

Until then, enjoy our journal.

The Aggie-Eagle Classic is more than football and fun. On Friday, the event hosted a college and career fair.

Iris Hariston-Grady, who works with Central Piedmont Community College’s NextGen program, was there with some of her students, to help them make career connections.

“They think they’re the greatest at everything,” she said of the Greensboro school. “Sometimes you want to see them get spanked.”

Although initially reluctant to work at A&T, Hariston-Grady said the experience was one of the best of her career.

Her mother attended N.C. A&T and is a member of the school’s Charlotte alumni chapter.

Not wanting to get “lost in the sauce,” Trinity chose a different college path.

With graduation now in her sights, she went to the career fair on Friday looking for inspiration.

“I don’t know what I want to do after I graduate,” she said, “so I’m just trying to see what different options are out here in the corporate field.”

If she opts for grad schools, A&T will join the mix.

“I miss that camaraderie of the HBCU family,” she said. “My mom is such a diehard, and her Aggie Pride is real.

Kiance Morrisey (left) and Chandler Williamson (right) are both seniors at N.C. Central. Dressed sharply in blazers and slacks, they had traveled to Charlotte with a student organization to attend the career fair.

It was the first Aggie-Eagle Classic for each of them.

Morrisey, who enjoys sports, said both schools should savor the game and the atmosphere.

“I expect us to win, obviously,” she said.

Morrissey said some of her friends who play on the Eagles team had been talking smack.

“They better back it up,” she said, “‘cause if they don’t, they’ll be hearing from me.”

Crystal W. Boyce arrived in Charlotte on Thursday, ahead of most activities, to attend an alumni meet-and-greet.

A 2007 graduate of A&T, she’s been attending the Aggie-Eagle Classic since 2003, when she was a freshman.

Her most memorable game was when she served as Ms. N.C. A&T State University, the official female representative for the school, from 2006-2007.

“Seeing the students, the excitement, the alumni, the camaraderie that it brought — to bring Aggies together and to bring Eagles together,” she said.

In Charlotte, Boyce said she’s looking forward to reconnecting with friends. She also wants to thank A&T alumni for their support.

As mayor of Charlotte, Vi Lyles performs many duties, official and unofficial.

After the event, Lyles spoke with QCity Metro about the importance of the Aggie-Eagle Classic.

“The entire weekend is a showcase of our HBCUs in the state,” she said.

She also spoke of what it means for Charlotte to host the event, which was scheduled to be televised.

“I can hardly wait to see the bands and the cheerleaders,” she said. “That is what makes people happy, and this is the time to enjoy it.”

Asked whether she ran after helping to lead the warmup, Lyles demurred.

Sylvia Squire describes herself as a “diehard Eagle.

She graduated for NCCU in 1989 and is active in the school’s alumni chapter in Winston-Salem, where she lives. Her son is a NCCU graduate, too.

“So, the second generation has completed,” she said. “I love my school.”

Squire also likes to run, which brought her to Camp North End for the Mad Miles event.

The sweatband she wore gave evidence of her membership in Winston-Salem Black Girls Run, the local chapter of a national organization.

I exercise five times a week,” she said. “Physical activity is very important. It keeps you looking young at 55.”

With the Mad Miles event scheduled for 10 a.m., Deborah Yancy had little time before heading to Camp North End.

So what did she pray for?

“I prayed for health and sanity…and for us (NCCU) to win this game,” she said.

Derek Paisley, who lives in South Carolina, used to bounce between Durham and Greensboro for the Aggie-Eagle Classic.

In Charlotte this year, he intends to party and link up with his friends…then head to the game later in the day.

With so much happening in the Queen City, Paisley said he had some hard choices to make.

“I’m definitely going out somewhere,” he said. “I just don’t know where yet.”

Keepin’ it in the Family

A.B. Bowens usually sets up his hotdog stand at the corner of Mint and Bland streets, not far from Bank of America Stadium.

For the Aggie-Eagle Classic, he moved a bit closer, to the corner of Morehead and Church.

“This is a once-in-a-blue-moon kinda thing,” Bowens said of the game coming to Charlotte.

But for all the people in town, Bowens said he doesn’t expect to make much money — maybe $400 after expenses.

That’s because he’ll pay is son, daughter, wife, mother and aunt for helping out.

I just wanna enjoy it,” he said of the weekend festivities.

He’s not an HBCU alum and won’t be rooting for either team, he said Saturday.

Still, he feels a sense of pride.

“It’s gonna be history,” he said. “We finally get to see them play in the Duke’s Mayo Bowl. That’s real big.”

Stanback said the game shows that “change is happening” and that more people will be exposed to HBCU culture.

“Everything takes time,” he said.

The Best of Frenemies

Taylor graduated from Central in 1990, Peed from A&T in ’94. They met at work and became friends.

On Saturday, they went to the Brooklyn Collective where two professors — one from Central and one from A&T — gave an history of the century-old Aggie-Eagles Classic.

Taylor said she found the event “insightful” about more than just the game.

“The names of the coaches, the campus buildings – now you understand where it comes from, and it really resonates,” she said.

When asked what they looked forward to in Charlotte, Peed piped up:  “Beatin’ those Eagles, those ‘lil ugly Eagles.”

C.C. Tann (right) isn’t a graduate of Central or A&T, but he loves tagging along to the Classic with his wife, Carolyn, who graduated from Central in ’69.

The couple especially like going to tailgating parties — a lot easier when the annual game was held in Durham or Greensboro.

“We usually know where the tailgates are,” he said as the couple walked toward Bank of America Stadium, “but being somewhere like this is new.”

N.C. Central needed the win more, he said after the game, noting that A&T won the first Aggie-Eagles matchup, in 1922.

Stewart appreciates the history of the rivaly and the impact it’s had to HBCU exposure.

One day, he said, he hopes to see HBCUs competing at the top level of college sports.

“We want to see an HBCU win the national championship one day,” he said, “and it will happen.”

Brother, Where Art Thou?

Derrick Daniels (N.C. A&T) couldn’t attend the game because he had to work, but he promised his sister Gwyn (NCCU) he’d Facetime her while she was in the stands.

“I got to get my trash talk in. It must be done,”he said weeks before the game, confident his school would win.

“I’m going to ask her to send me a picture of the score, but (she) probably won’t, because we both know what the outcome is gonna be.”

After his Aggies lost 28-13, the once-boasting Derrick was nowhere to be found.

Gwyn attempted to FaceTimed her brother, but he didn’t respond.

A college football game may not be everyone’s idea of a girl’s getaway, but for Wendy Baskins (left) and Chante Mangum (right), it was.

The two were roommates as freshman at NCCU in 1985.

Around this time every year, they join five of their former classmates for an annual girls trip.

This year, they chose the Aggie-Eagle Classic to celebrate the rivalry’s centennial game — and they got rewarded with an Eagles win.

“It feels good. It feels amazing,” Baskins said after the game.  “One-hundred years, and we ended up on top.”

The Mad Miles event wasn’t the only time some HUCU fans laced up their running shoes this weekend.

A few showed up Sunday for the annual Around the Crown 10K race, which kicked off at Truist Field at 7:30 a.m.

The Charlotte Sports Foundation, which hosted this year’s Classic, partnered with both running groups to bring the two together.

About 5,000 runners were expected at the Sunday race, the state’s largest 10K.