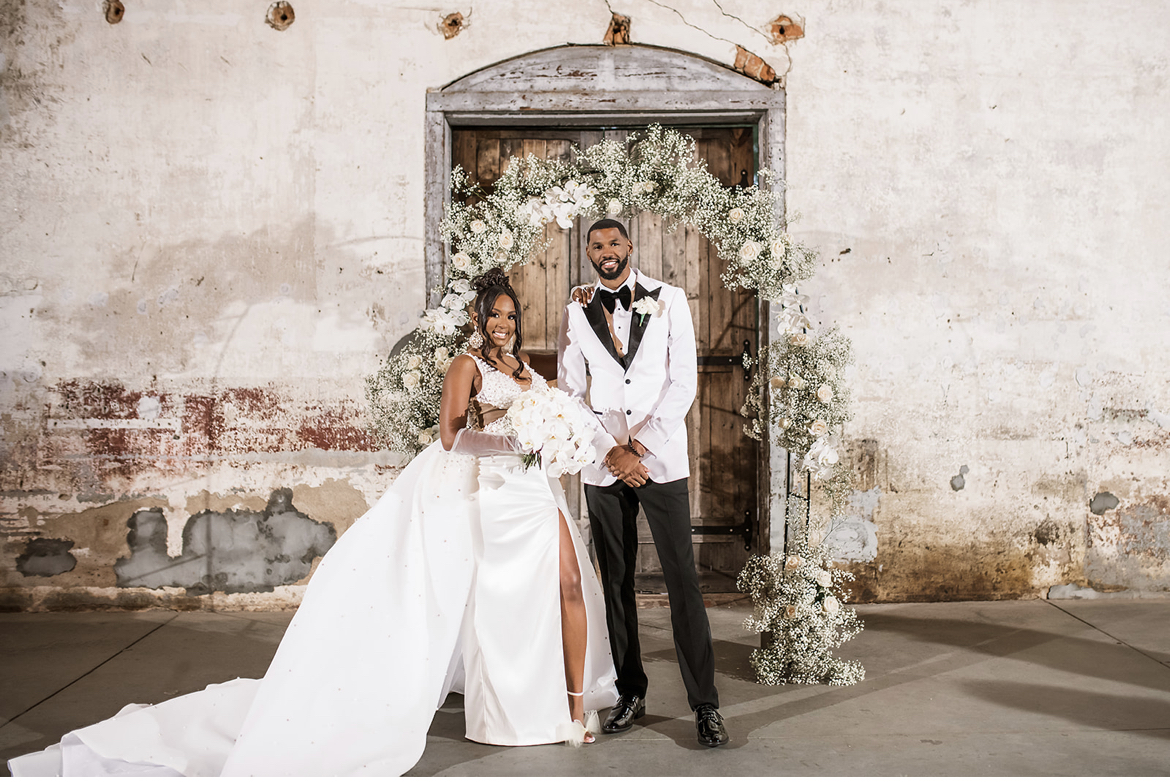 
Janaye was a former event coordinator who knew exactly what she wanted on her wedding day. She had planned an extravagant affair that required twenty-seven vendors. What she had not planned for was Hurricane Ian.

Would her wedding plans be gone with the wind? Janaye tells her story.

Antonio and I met on social media. I worked with one of the guys he played basketball with when he was in college, so we shared a mutual friend. I saw Antonio on his Instagram page and added him as a friend. We had been friends for a couple of weeks and exchanged messages and phone calls back and forth when Antonio sent me a personal message asking me out. He was 6’7″, and I thought he was very attractive. I was excited about going out with him.

Our first date was not anything formal. I had just gotten off work and picked up my son from daycare. My mom met me to get my son before Antonio, and I went to Olive Garden and had dinner. We enjoyed each other’s company. He seemed kind, sweet, and loving.

He was a gentleman. Many guys nowadays will not hold the door or pull out a chair for you. They might not even let you order first or suggest what to try. Antonio was different. He seemed interested in our conversation and maintained good eye contact. The conversation went very well.

Our next date was nearly canceled. My son was supposed to go to a birthday party on that day. Instead, I suggested we go to a movie after taking my son to Chuck E Cheese. Antonio said, “No, I will go with you all.”

My son’s father is not present, and I am careful not to introduce him to anyone I am not serious about. Although I was apprehensive, Antonio insisted on coming. My son, S.J., was almost four years old and afraid of Chuck E Cheese, but he clicked with Antonio. They visited Chuck E Cheese and played games together.

Antonio was very hands-on with him. My son’s birthday was the following week, and he asked if “Mr. Antonio” could come to his party. I was thinking, “Oh, that is a big step. This may be too soon.” Still, I asked Antonio if he would come, and he enthusiastically said yes. That was the start of many dates.

Antonio said he fell in love with my son before he fell in love with me. When I saw how he interacted with S.J., I knew how special Antonio was. It is hard to find a man who is not only willing to do right by you but also by your child. Some guys will try to do it to get close to the mom. I could tell that Antonio enjoyed spending time with my S.J. That was very important to me. Once I saw how loving, kind, and gentle he was, I said, “This is really different, something I have never had before. I should take it seriously.”

We had been dating for about seven months when Covid happened. I already knew that Antonio was special, but I was still trying to guard my heart and be certain that he was the one. Everything was shut down, including my son’s daycare. I was working from home. Antonio started coming over every day to help me with S.J. and to help me around the house. He was there every single day. That’s when I knew, without a doubt, that he was the one for me.

We got engaged in April 2021. We had gone to Elevation Church in Ballantyne that morning. He kept saying his stomach was bothering him, so we left early. I knew we were going to my son’s football game after church. Antonio took me to Ballantyne Corporate Park.

I was taking my heels off to put on some flats when he told me to keep my heels on. As we pulled up, I saw a bunch of rose petals, and he told me to get out of the car. As we walked down the path, I could see all our family and friends holding signs that said, “Marry Me.”

We stopped at a place where the rose petal formed the shape of a heart. That is when Antonio got down on one knee and proposed. After giving me a ring, he had my son come up and give me flowers.

I knew it was coming eventually; I did not know when. We had talked about it and even went to Diamonds Direct to look at different options for rings. Yet on that day, I felt surprised. I was happy and excited. Of course, I cried.

We all went to a place called Margaritas to celebrate. Then we went home, where everyone met us for an engagement party/ barbecue. Our friends and family stayed into the evening just having a good time and celebrating.

Wedding planning was a beast, but it was definitely rewarding. We had twenty-seven vendors. Can you imagine keeping up with and responding to that many vendors? The average wedding has about ten. In addition to the usual vendors, such as photographers, caterers, florists, and a DJ, we had performers. There was a saxophone player, a live painter, sparklers, human statues, dancers, a stilt walker, and more.

I did not hire a wedding planner because I was an event coordinator. I knew how I wanted my day and used the knowledge I gained from coordinating to plan my own wedding. I did not want to pay somebody to reach out to vendors when I already knew the ones I wanted. I hired a day of coordinator, and I reached out to all the vendors, got all the contracts, tasted the food, and did everything.

It took me a year to find a wedding dress. I must have tried on more than 250 gowns. I finally decided to go with a designer in Europe called Goddess Exclusive. I created a dress by combining the best features of all the dresses I had tried. They drew it up for me and made the dresses custom. My flower girls also had custom gowns by the same designer.

I sent them about 32 measurements of myself, and they made the dress to fit my measurements, so I was confident it would fit. They sent me pictures and videos throughout the process, and we would get on FaceTime. They even found somebody in their shop who was about my size, and she would try it on so I could see how it looked. Once it was finished, it was at my doorstep within forty-eight hours.

The wedding was beautiful. I was nervous during the week leading up to the wedding because forecasters predicted that hurricane Ian would bring massive amounts of rain and wind to the Charlotte area on our wedding day. I cried all day Sunday and Monday because I did not think any of my guests or vendors would show up.

The weather was beautiful, with sunny skies when we had the rehearsal and rehearsal dinner. When I woke up the following day, the clouds were dark and looked funny, but it was not raining. When I started getting my hair done, it began to rain heavily. Surprisingly, I was at peace. Nobody reached out to me to say they could not make it, and no vendors were canceling.

After enjoying a catered breakfast with mimosas, my bridesmaids and I finished our makeup. Then the photographer and videographer arrived. We took some pictures before leaving for the venue.

There was a lot of rain and wind on our wedding day. The wedding ceremony and cocktail hour were supposed to be outside, but we had to move everything inside because of the weather. The rain and wind were so loud during the ceremony some people had difficulty hearing us. Overall, it was not as bad as had been predicted, and the wedding was absolutely beautiful. Of the 211 guests to RSVP, 204 showed up. The only vendor that did not show up was a choir. The DJ canceled the day before the wedding, so we had to find someone else quickly.

We had a live painter who painted the ceremony. My favorite part was when Antonio made a vow to my son. He told S.J. that when he is in a bad mood, S.J. finds a way to brighten his day. He promised to teach S.J. right from wrong, love him unconditionally, and protect him from harm. He told him that he loved him and always would and was proud of him and what he had done so far.

He said that he was blessed and honored that S.J. calls him dad and that he and his mom are in good hands. There was no dry eye in the place, including S.J. When we kissed at the end of the ceremony, sparklers lit up the room. We jumped the broom, and as we walked back down the aisle, we were cascaded with bubbles.

The reception included a phenomenal saxophonist who played during the cocktail hour. We had human statues holding large flower balls that moved about. Our guests loved that. A stilt walker added festivity to the dance floor. Our MC was Fly Tye, the MC for the Charlotte Hornets. He was great. We were supposed to have a horse and carriage, but that had to be canceled because of the weather.

Our honeymoon was in Montego Bay, Jamaica. Except for a trip to Canada when I was young, I had not been outside the United States, so it was great. We spent most of our time at the resort relaxing and recuperating. We enjoyed limestone massages, the beach, and the pool.

Our room came with a butler who helped us with dinner and drinks. We went on a water rafting excursion that was fun. I did not know that Jamaica had so many hills and mountains. I also did not know that the roads were so narrow or that they drove so fast. That was a bit frightening.

We ended our honeymoon with a trip to Universal Studios in Orlando. We usually go to Disney World yearly for vacation, but we plan to have a baby soon. Hopefully, I will be pregnant by vacation next year, so Disney will be out.

When you are planning your wedding, start with the venue first. This will allow you to have a set wedding date when you begin to talk with other vendors. Try for peace. Things never go exactly as you planned but try to remain calm.

Everything happens for a reason, and it will all work exactly how it should. Finally, do exactly what you want to do, no matter how small or grand it may be. It is your day, and you should make it exactly what you want. It goes by so fast, and all you will have will be memories, pictures, and videos.