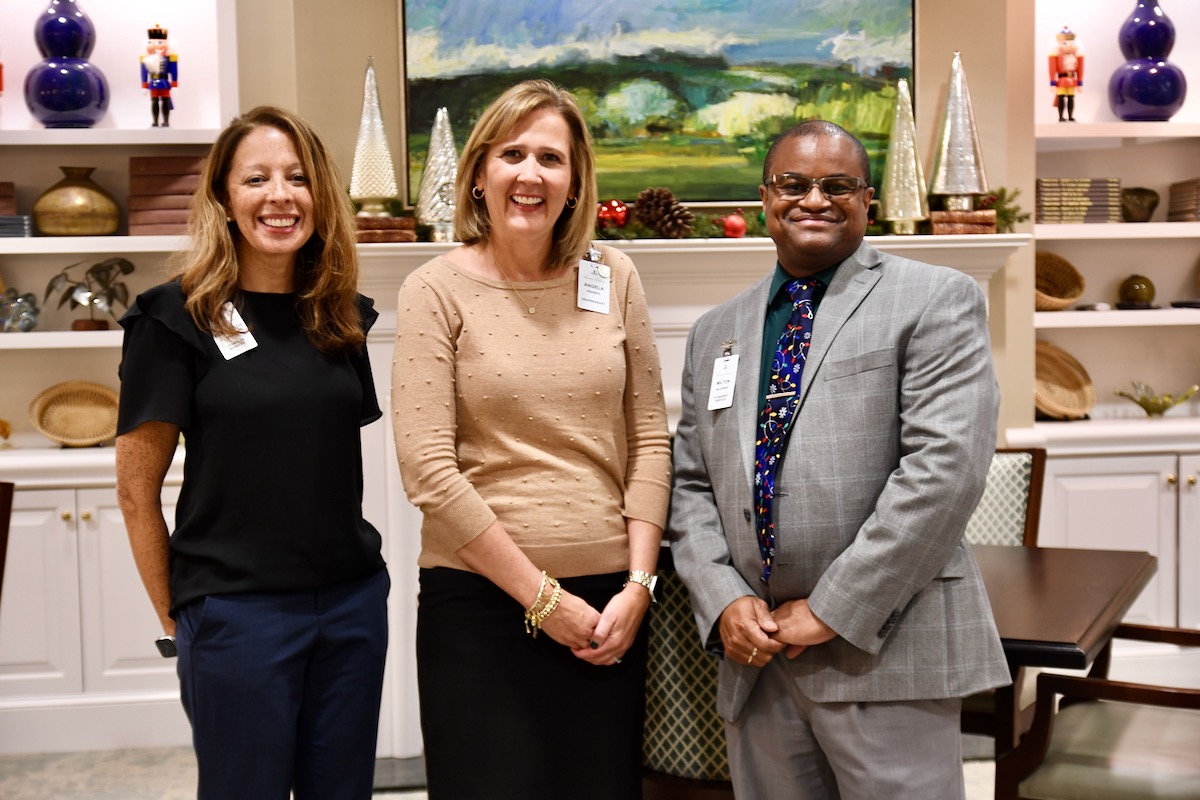 “It’s a calling,” she says. “I’ve worked with older adults since I was 14, when I began housekeeping at a community for low-income residents in Massachusetts.”

Now approaching age 50, Rigsbee was chosen this fall to lead Sharon Towers during one of the most exciting and challenging times in the nonprofit community’s 52-year history.

In addition to the evolving uncertainties of Covid-19, Rigsbee also is responsible for overseeing a major expansion and renovation that is reshaping the 28-acre, tree-lined campus in Charlotte’s SouthPark neighborhood.

For Rigsbee, success means keeping her focus on the people – those who work at Sharon Towers and especially the residents who live there.

“The residents and the staff are equally important to me,” she said. “I want to have a high-functioning team that does the very best we can for the people who live here.”

Among her priorities: ensuring that Sharon Towers maintains an environment that invites diversity, equity and inclusion. The organization is pursuing deliberate efforts to make sure Sharon Towers is a place where differences are welcomed, where many perspectives are respectfully heard, and where every individual feels a sense of belonging and inclusion. This begins with understanding diversity in its many forms, among them gender and gender identity, sexual orientation, socioeconomic status, language, culture, national origin, religious commitment, age, (dis)ability status, race, ethnicity and political perspective.

“There has always been a big commitment here to diversity and inclusion,” says Rigsbee, who has worked at Sharon Towers for more than 26 years.

Both McGowian and Byrd, like Rigsbee, express a deep appreciation for the work they do with seniors.

‘I love working with seniors’

Until his recent promotion, McGowian had spent his career working in various sectors of the food service industry, beginning in high school. A Florida native, he has worked at Sharon Towers for about three years.

In his new role, McGowian is responsibilities for a range of areas that include food service, environmental services, and facilities. On a recent evening, he joined Rigsbee on a call with a Sharon Towers family to answer questions related to living there.

“I love working with older adults,”he said. “I love listening to their stories and their wisdom.”

McGowian said he wants to “make a difference” in the lives of Sharon Towers residents, some of whom have stopped him in the hallways to offer encouragement or words of congratulations since his promotion.

While food service remains close to McGowian’s heart, he said he also enjoys learning new things and feeling that he is part of a team devoted to inclusion.

“So many times, we are invited to a dance, but nobody is paying attention to us,” he said. “One of the greatest things you can do for a person is listen to their ideas.”

For Byrd, who oversees Sharon Towers’ healthcare team, the Covid-19 pandemic has been a defining moment. When the pandemic first showed up at the facility in May of 2020, “things just kind of stopped around here,” she said.

Since then, she looks back with amazement at all that she and her team managed to accomplish.

Instead of getting calls of fear, we got calls of thanks,” she said. “I think the pandemic is showing us that we created the right mission, and we have been living that mission every day for the last year and a half.”

Byrd has worked at Sharon Towers for 20 years. In college, she studied to be a recreational therapist but eventually found her way into senior care “and just loved it.”

“I love this age range, she said. “I just love the population.

“They’ve worked their whole lives. I feel like we owe them the respect and dignity to give them a good quality of life,” she added.

Byrd said the likes to remind her staff that Sharon Towers employees in reality work in the homes of the people who live there.

“Imagine if you’re at your home every day and people are coming into your home,” she said. “If you keep that mindset, it kind of keeps you focused on why you’re there and what you’re doing.”

As a new year unfolds, Byrd said she looks forward to resuming some of the projects and team-building efforts that got put on hold when the pandemic began.

Rigsbee, the President and CEO, said she’s excited about the year ahead. She and her management team have planned an off-campus retreat to focus on new priorities.

When asked what overall impact she would like to have as Sharon Towers’ top executive, Rigsbee said she wants to create a space where older adults can remain active and age comfortably.