At the Beatties Ford Vocational Trade Center, Frances Hall says she is keeping a vow she made to God 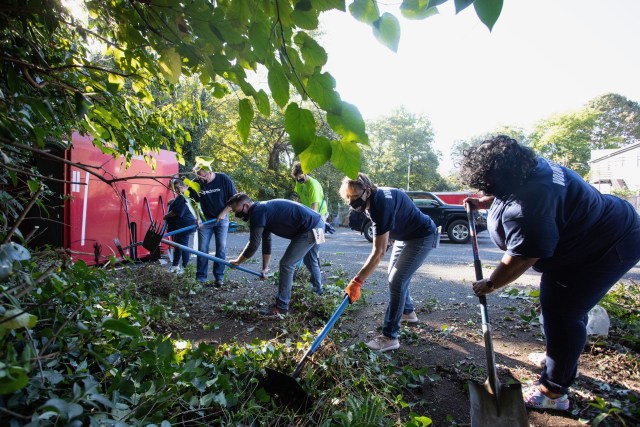 At the Beatties Ford Vocational Trade Center, Frances Hall says she is keeping a vow she made to God

Seventeen years ago, Frances Hall lay on a waiting room floor at Carolinas Medical Center, praying for God to save her pregnant daughter, who was near death and in the throes of drug addiction.

“I told God, I said, ‘If you save my child, then you can use me to save other people’s children,’” Hall recalled.

“God kept his end of the promise, so I’m keeping mine,” she said.

On Saturday, Spectrum recognized Hall and the trade center’s efforts with a $50,000 grant, 25 laptops and free high-speed internet services until 2025. Spectrum will also pay to renovate portions of the building that houses the trade center — all part of a $30 million nationwide initiative to assist organizations that provide community services and job-training skills in underserved communities.

The renovation began on Saturday with the help of Spectrum employees, community members, and volunteers from Rebuild It Together of Greater Charlotte.

Rahman Khan, Spectrum’s vice president of Community Impact, said the trade center was chosen because of its impact on the corridor.

“We want to make a meaningful, tangible difference in local communities and hopefully impact the community economically…,” Khan said.

“We try to change the minds of the people that come in here, and I can’t think of anything you can do in life greater than seeing a life change,” Hall said.

“Seeing young men come through here that are lost, unemployed, underemployed, or re-entering the community from incarceration, they stay with us for six to seven months and are now working jobs that are leading them down a path of developing a career,” she added.

‘My belief in God started here in Charlotte’

Hall’s road to helping others has been fraught with pain and personal challenges.

In 1982, her husband was murdered in their hometown of Miami, Florida, leaving her a widow with four small children. Shortly after, on a trip to Charlotte, Hall reconnected with her birth mother who, she said, had abandoned her and her siblings when they were young.

“We talked, and she explained to me that she had accepted the Lord in her life, and she asked me to forgive her, and I did,” Hall said.

On another trip to Charlotte, Hall attended a worship service at New Life Baptist Church, where she saw the film “The Burning Hell,” a 1974 evangelical movie that depicts eternal punishment for nonbelievers and unforgiven sinners. While watching, Hall whispered, “Oh, God, that’s me.”

“I was doing things that nobody in my family knew,” she recalled. “I was really fighting addiction myself at the time. I said, ‘God, what’s going on with me? I’m lost.’ I came up to the altar and accepted the Lord in my life, and from that point to this it’s been totally different. My belief in God started here in Charlotte.”

When Hall moved to Charlotte permanently in 1992, she brought with her construction skills she learned from her grandfather — plastering and brick masonry — as well as some she picked up along the way, like reading blueprints.

She started with a cleaning company, which later evolved into a construction business, and for 20 years she worked as a military contractor for the U.S. Army Corps of Engineers.

One evening in the early 2000s, Hall got a phone call. Her pregnant daughter, addicted to drugs, was fighting for her life at Carolinas Medical Center. The daughter would recover, and the incident proved to be another life-changing experience for Hall.

Fresh from making her promise to God, she formed a group called Christian Women of Elegance, which sought to help mothers fighting drug addiction.

The group operated from a house on Rozzelles Ferry Road, a space it later outgrew. That’s when Hall reached out to Dr. Rosamuel Dawkins Jr., a prominent Black physician, who owned a building at 1406 Beatties Ford Road and was about to retire from his practice. (Dawkins died in 2013)

“He said, ‘Fran I’m going to let y’all use the building, and I want to be involved in what y’all are doing,’” Hall recalled.

In 2007, Hall opened the doors of the Beatties Ford Road Counseling Center, and later, at the urging of Dawkins, the trade center.

“He would always tell me, ‘Fran, you need to share your trade with the next generation,’” she said.

With help from other Black contractors and with her two sons working as instructors, Hall opened the Beatties Ford Road Vocational Trade Center in 2016.

The school is accredited by the National Center for Construction Education and Research, as well as by Central Piedmont Community College. It offers construction-related courses such as electrical, heating and air, plumbing, metal framing, drywall, and brick masonry.

More than 100 students have finished one of its six-month programs, Hall said, and about 300 names are on the school’s waiting list.

“I have not had one student come here that didn’t finish or get a job,” she said.

The ups and downs

Despite her successes, Hall also acknowledges challenges — both financial and emotional.

“I got frustrated one day, and I said, ‘God, I don’t want to do this no more,’” she recalled. “There was a young man we wanted to get in the school, and he wanted to take up concrete. He was about 18. I didn’t get him in here quick enough, and he got murdered.”

“That thing got to me so badly, I just said, ‘I’m done; I can’t,’” she said. “I’ve seen a lot of death and dying since I’ve been here on Beatties Ford Road.”

But she also has seen successes

She recalled one student who came to the trade center wearing a police ankle monitor. Hall said instructors quickly noticed that the student was a math wiz, and when it was time to place him for employment, she said, he was hired by one of Charlotte’s major heating & air companies

One day while shopping last year, Hall said, she ran into the student’s mother, who informed her that the former student is now making more than $100,000 a year, has bought a house, bought his mother a car, and was about to get married.

Soon, the trade center will be expanding. The school has purchased a 18,000-square-foot building in downtown Chester, S.C., that will serve as a second location — the Chester Vocational Trade Center, set to open early next year.

Hall also owns a vacant lot next to the Beatties Ford Road location. She said plans are underway for an all-boys charter high school, complete with dormitories, which will focus on robotics, engineering, architecture and masonry. She projects an opening in 2024.

The idea for starting a charter school came about, she said, because many of the students who came through her doors weren’t able to do math or read above a sixth-grade level.

“We’re going to take high school students and make it like it’s four years of college,” she said. “So when the students come out, they come out with a trade. This opens a door for their life.”

Two years ago, Hall hosted a roundtable with the youth of the Beatties Ford community to find out what they wanted from the trade center. The answer: a studio to make music and podcasts.

In April, the center received $50,000 from SAFE Charlotte, a city of Charlotte initiative started last year to combat a rise in violent crime.

Hall used the grant to launch a digital media program, where youth ages 12 to 17 learn podcasting, broadcasting and, of course, are introduced to the construction trades.

The program was so well received that the school restarted it this month, Hall said, adding that the grant from Spectrum couldn’t have come at a better time.

She said it’s vital that young people who live in the Beatties Ford Road corridor have resources in their community — and that they see people who look like them providing those resources.

“…Our children have been told such lies about their real history in school,” Hall said. “And so they need to see this current history, us, caring for them, opening doors for them that no man can shut.”

The post At the Beatties Ford Vocational Trade Center, Frances Hall says she is keeping a vow she made to God appeared first on Q City Metro.