Brandon Codrington, a NCCU walk-on who became an All-American 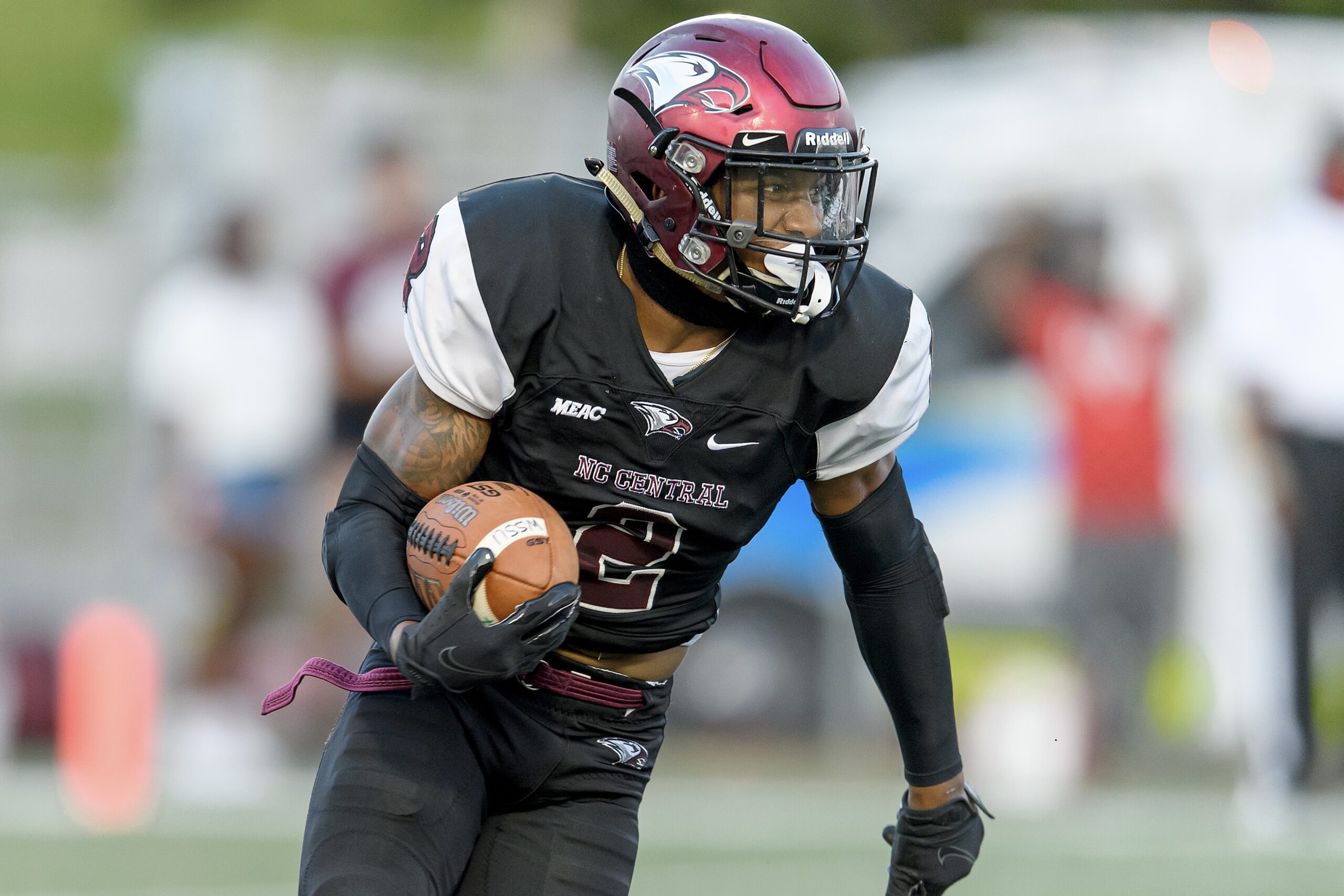 Brandon Codrington, a NCCU walk-on who became an All-American


Growing up Raleigh, Brandon Codrington knew from an early age how big the Aggie-Eagle classic was. His father and uncle were N.C. Central graduates, so he would often witness the trash-talking and crazy atmosphere at the games.

Now in his third year as a N.C. Central player, the Aggie-Eagle Classic has a different feel.

“We try to think of every game as if it’s a championship game,” he said. “Of course, going down to A&T, it’s always a little hyped up.”

Codrington said he expects that atmosphere he witnessed as a kid to be just a big, if not bigger, in Bank of America Stadium when the two teams meet Sept. 3 in the Duke’s Mayo Classic. He’ll have plenty of family members at the game, but Codrington said his focus will be strictly on the field, determined to notch a win for his squad.

Standing five-feet-nine-inches tall, Codrington felt that he was overlooked coming out of Broughton High School in 2019. He was in contact with multiple schools, he said, but most were offering partial scholarship and wanted him to be a preferred walk-on.

“It just felt like I would be a home if I came here,” he said.

Head Coach Trei Oliver, in his first-year, said that when Codrington arrived he was undersized, built more like a “seventh grader” than a football player. He said that the team had many returning players, so getting playtime was not going to be an easy task for the freshman.

“It didn’t take long at all to see that the young man was talented,” Oliver said. “…he worked his butt off ,and he ended up getting in the rotation.”

As a true freshman, Codrington saw the field as a kick returner and punt returner.

He averaged a punt return average of 7.8 yards, and averaged 18.8 yards per kickoff return.

In the final minute of a tie game versus Delaware State (Oct. 26) he returned a kickoff 75-yards for the game-winning touchdown. He earned MEAC Specialist of the Week award.

“It was definitely a surreal moment,” Codringtone said.

He finished the season with a number of accolades — All-MEAC Third Team as return specialist, the Phil Steele All-MEAC Team (Third Team), and finished among MEAC leaders in both punt returns and kickoff returns.

Codrington said it was a “blessing” to received the recognition, but he was more focused on a much bigger accomplishment.

“My goal was to become an All-American so I kind of looked passed that to set my goal higher going into my sophomore year,” he said.

The team kicked off their season opener against Alcorn State in the nationally televised MEAC/SWAC Challenge at Center Parc Stadium in Atlanta.

In a close game, NCCU had a slim 16-14 lead in the fourth quarter until Codrington scored a game sealing 77-yard punt return touchdown.

Codrington said he got a lot of media attention from the big play, but the spotlight only pushed him to do better.

“I tried to make sure that I could kind of repeat it every game so that I could become an All-American,” he said.

That season he ranked second in the league with a 22.5-yard kickoff return average.

In a game against Delaware State, he returned a punt 25 yards to set up a go-ahead touchdown in the fourth quarter.

The game went into overtime, where Codrington blocked a field goal attempt to set up a win for Central. He was once again named MEAC Specialist of the Week.

Though he received recognition as a return specialist, Codrington also impacted the defensive unit as a starter in the secondary.

NCCU’s hopes of becoming MEAC champions ended after losing to South Carolina State, 27-24. Despite the loss, Codrington had put the conference on notice.

Codrington was also named to 2021 Phil Steele FCS All-MEAC Teams in four different positions — First Team merit as a punt returner, Third Team as a kickoff returner and all-purpose player, and Fourth Team as a defensive back.

He accomplished his goal and was named a member of the 2021 BOXTOROW HBCU college football All-America team as a punt returner.

“It felt great to accomplish what my goal was, but now that the season’s over with, I’m just looking to repeat it again,” Codrington said.

Codrington and many of his teammates were freshman when Oliver became head coach in 2019. Coach Oliver believes that the experience of these players, along with new players and coaches, will yield a better result this year.

He said he’s noticed that Codrington has gotten a lot bigger in the offseason.

“The way he’s transformed his body is a testament to his work ethic and our strength staff,” he said.

Oliver has taken notice that Codrington has also has a better understanding of the game from his time spent in the film room. One thing that hasn’t changed, he said, is his competitive spirit.

“He has a chip on the shoulder that he wants to show everybody that he’s the best,” Oliver said.

Codrington said he’s gained recognition as a return specialist but wants more respect as defensive back. Oliver, his coach, said that with the work he’s put in this off-season, and with more exposure, that respect will come.

“It won’t take long before people understand they probably don’t want to be trying him too much by throw his way,” he said.

Codrington doesn’t dwell on Central’s last two losses to A&T. He said the end results could easily have been different.

“We just felt like we were a few plays away, few mistakes away, from being in the game with A&T,” he said. “If we go in there and execute our game plan, then we will win.”