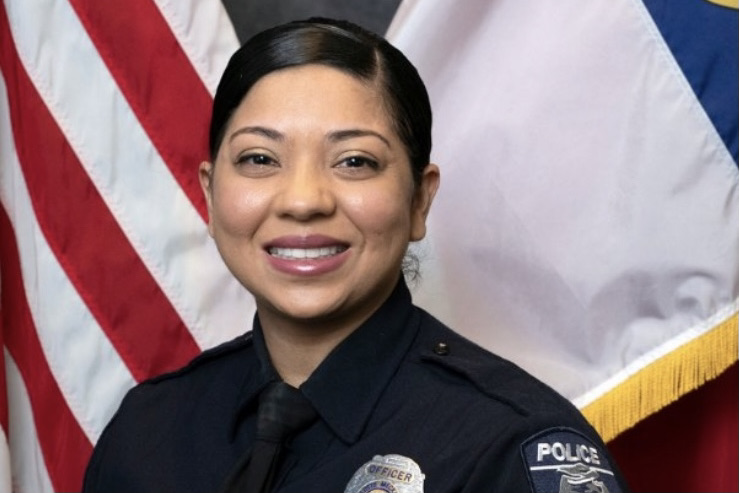 
A Charlotte-Mecklenburg police officer who was working an accident scene on Interstate 85 was killed early Wednesday when two tractor-trailers collided then struck multiple police vehicles. Three other officers were treated for injuries.

CMPD Chief Johnny Jennings identified the officer who died as Mia Goodwin, a wife and mother of three children. She was hired by CMPD in October 2015 and worked in the department’s University City Division in north Charlotte.

“We put on this uniform, and we know that there is no guarantee that we will come home to our families,” Jennings told reporters at a press conference hours later. “That’s the most difficult part.”

The collision happened at the scene of an earlier wreck at I-85 and W.T. Harris Boulevard. The officers were there directing traffic.

According to CMPD, the earlier wreck, which involved an overturned tractor-trailer, happened Tuesday at about 10:37 p.m. That initial wreck shut down all southbound lanes on the interstate.

Shortly after 1 a.m., a single lane was reopened, and traffic began to to move again. Goodwin, along with other third-shift officers, arrived on the scene to relieve other officers who had been there assisting.

At 3:39 a.m., a semi-truck with a trailer traveling southbound collided with a second semi-truck, causing them to strike multiple police vehicles. Goodwin died at the scene. The driver of one of the trucks was taken to a hospital.

Jennings said Goodwin is believed to be the first CMPD officer killed at the scene of a traffic accident since the 1980s.

Mayor Vi Lyles posted a video on Twitter expressing her condolences. “We can never take for granted the service of officers in CMPD,” she said.

Jennings, who said he did not know Goodwin personally, described her as “an inspiring young woman” who had ambitions to rise within the department.

Back the Blue NC, an organization that supports officers and their families, set up a GoFundMe page to financially assist Goodwin’s family.

According to a statement by CMPD on Thursday, 40-year-old Daniel Leon Morgan has been charged with involuntary manslaughter, misdemeanor death by vehicle, failure to reduce speed and felony failure to move over for stopped emergency vehicles.

Police said Morgan was operating a 2020 Volvo VNL and failed to move to a single-open lane on I-85 South. He also allegedly failed to reduce his speed and struck, four CMPD vehicles, a semi-truck and Officer Goodwin.

This story has been updated to reflect the charges filed for the accident that led to the death of Goodwin.