High gas prices? No sweat for this Charlotte EV owner 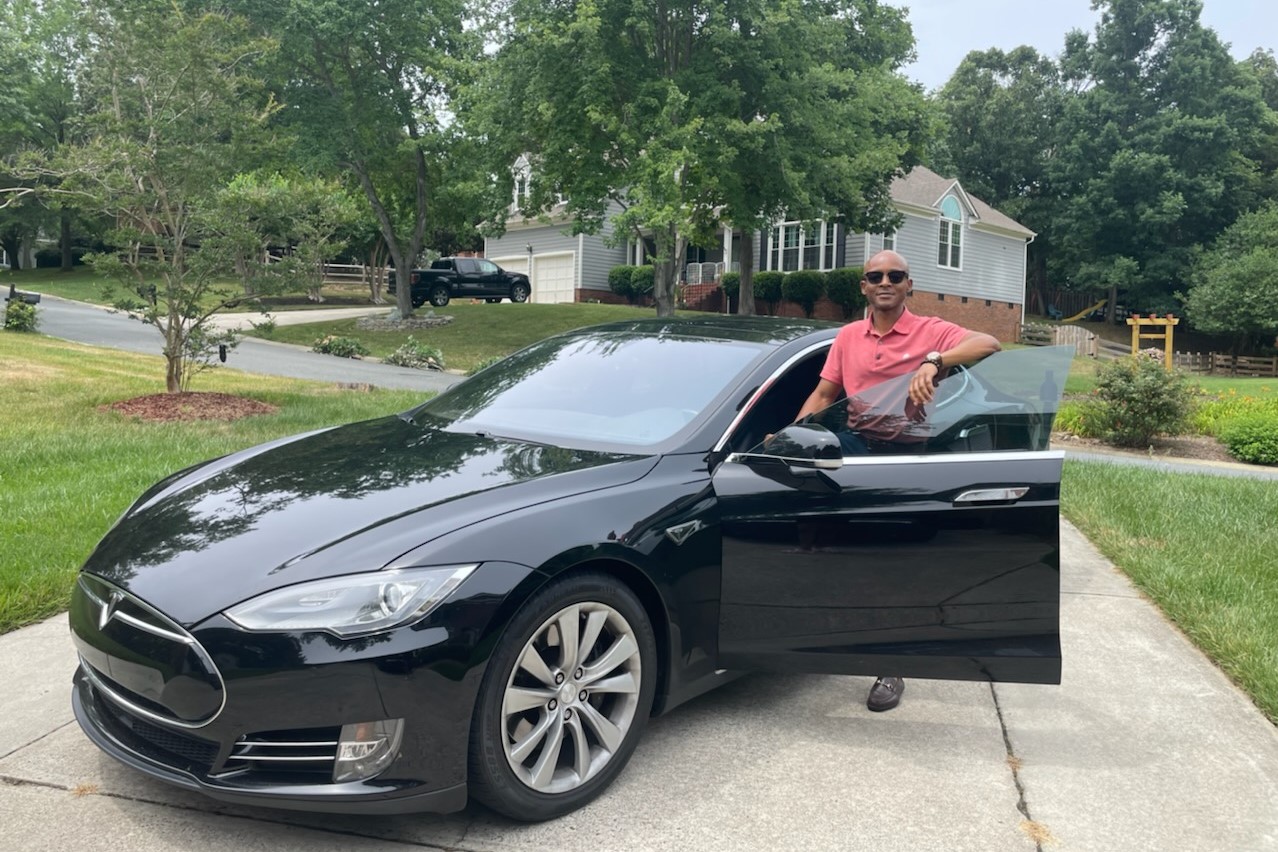 High gas prices? No sweat for this Charlotte EV owner


Ray Addison II doesn’t worry about gas prices, no matter how high they get. He’s been driving a battery-powered Tesla for the last six years, and he doesn’t plan on going back to internal combustion engines any time soon.

About 2.32 million electric cars now roam America’s roads, but as of June 2021, only 3% of those electric-car owners were Black, according to the Fuels Institute, a non-profit think tank.

Addison, vice president and chief marketing officer for Go-Station, an Austin, Texas-based company working to expand the network of charging stations for electric vehicle, said he wants to see more Black drivers behind the wheels of EVs.

Making the switch to electric

Addison bought his Tesla while working for Daimler, a European carmaker. He’s long been a self-described “car guy.”

“I was intrigued by the technology,” Addison said of his Tesla. “For someone who’s driven nothing but gas-powered cars, I was interested in the performance of it.”

After a lot of research, Addison determined Tesla to be his best option. At the time of his purchase, the company offered free, unlimited charging with a vast network of charging stations.

He recalled that during his test drive, a Tesla sales consultant invited him to feel the car’s power, so he pressed the pedal and gave it free rein on a stretch of open road.

“It was quiet, seamless, fast,” Addison said. “I felt like I could feel my organs press against the seat.

“Some people say you gotta have an engine that burps and growls,” he added. But the test drive threw all of that out of the window. “It’s about how it makes you feel, the sound it makes, the impression you make when you pull up to a valet,” he said.

Addison’s children like his Tesla, too, referring to its speed as “wee mode.”

One of the biggest sticking points around electric vehicles is “range anxiety” — potential buyers fear running out of battery and being stranded.

“I can understand that [perspective],” Addison said. “The closest parallel is an iPhone, where everyone is walking around with a lightning cable in their backpack.”

According to the Federal Highway Administration, the average American drives about 39 miles daily – well within the range of any modern EV, which can travel more than 200 miles between charges. Some days, Addison said, he drives only about seven miles.

Like most EV drivers, Addison charges his Tesla at home. He estimates his monthly electric bill has increased by about $20.

Chargers available on the market can plug into any 120-volt outlet, the two-pronged kind used to power household appliances. For a faster charge, some EV drivers install 240-volt outlets, commonly used for electric stoves and dryers.

Addison’s Tesla cost him $106,000. (Other Tesla models sell for far less.) He paid an additional $1,600 to have a charging station installed at his home. Most of that cost, he said, went to labor.

With gasoline prices at an all-time high — currently averaging $4.643 a gallon in North Carolina, according to AAA — it’s easy to see why more people are considering EVs.

As EVs grow more popular, the major automakers are rushing to secure their share of the market. General Motors recently announced that it will reintroduce a battery-powered Bolt next year with a sticker price of $25,600.

President Joe Biden has set a goal for half of new car sales to be electric, fuel cell or hybrid electric vehicles by 2030.

Last year’s federal infrastructure bill, which Biden signed, included $7.5 billion to add 500,000 charging stations in the U.S. and Canada by 2030. About $16 million of that total was designated for North Carolina.

Go-Station currently has more than 4,000 charging sites across North America and hopes to expand with an office in Charlotte.

Charlotte has one of its own public charging stations, known as the PoleVolt, located at the Ritz at Washington Heights, a public space on Beatties Ford Road. Duke Energy, the city of Charlotte and the UNC Charlotte Energy Production and Infrastructure Center will roll out at least two more in the future as a pilot program to study the viability of creating a wider network of public chargers. (Tesla has its own network of charging stations.)

EV owners and companies have created apps like PlugShare and ChargeHub to share information about where to find charging stations, sometimes for free.

Saving money, looking futuristic and helping the environment are all good, but Addison admits there are a few tradeoffs.

Some charging stations take up to 45 minutes to fully charge a battery that’s been run all the way down. Others require considerably less time, but far more than it would take to fill up a gas-powered car at a service station.

While recharging his Tesla on a trip to Maryland, Addison “found a grassy spot under a shady tree and I just sat,” he recalled. “I could recuperate physically and mentally.”

Addison said he finds himself buying tires more often because of the Tesla’s power, but he saves on maintenance and repairs (EVs have no engines, with all those pistons, pumps and moving parts.)

A change in the transportation landscape

Some research suggests that electric vehicles are right on track with Biden’s sustainable transportation goals. A 2020 Consumer Reports survey predicted that EVs will outsell gas-powered cars by 2040. Market research firm IHS Markit has forecast that hybrid and electric vehicles will increase to 32% of all vehicle sales in the United States by 2030. China and Europe make up some of the fastest-growing markets for electric cars.

“I don’t know if there’s gonna be a world where every vehicle is electric,” said Addison.
“There are still adjustments that need to be made in energy production.”

Academics and human rights advocates have voiced concerns about the human cost related to mining for minerals to make the batteries that power these futuristic vehicles.

“If you go up the chain, sometimes you’ll find these green solutions are powered by dirty sources,” Addison said. “But as a whole, are we doing better? Are we on the right path?”