Historically Black colleges in the Carolinas have high percentages of students with federal loans, data shows; taking a ‘deep breath’ at JCSU 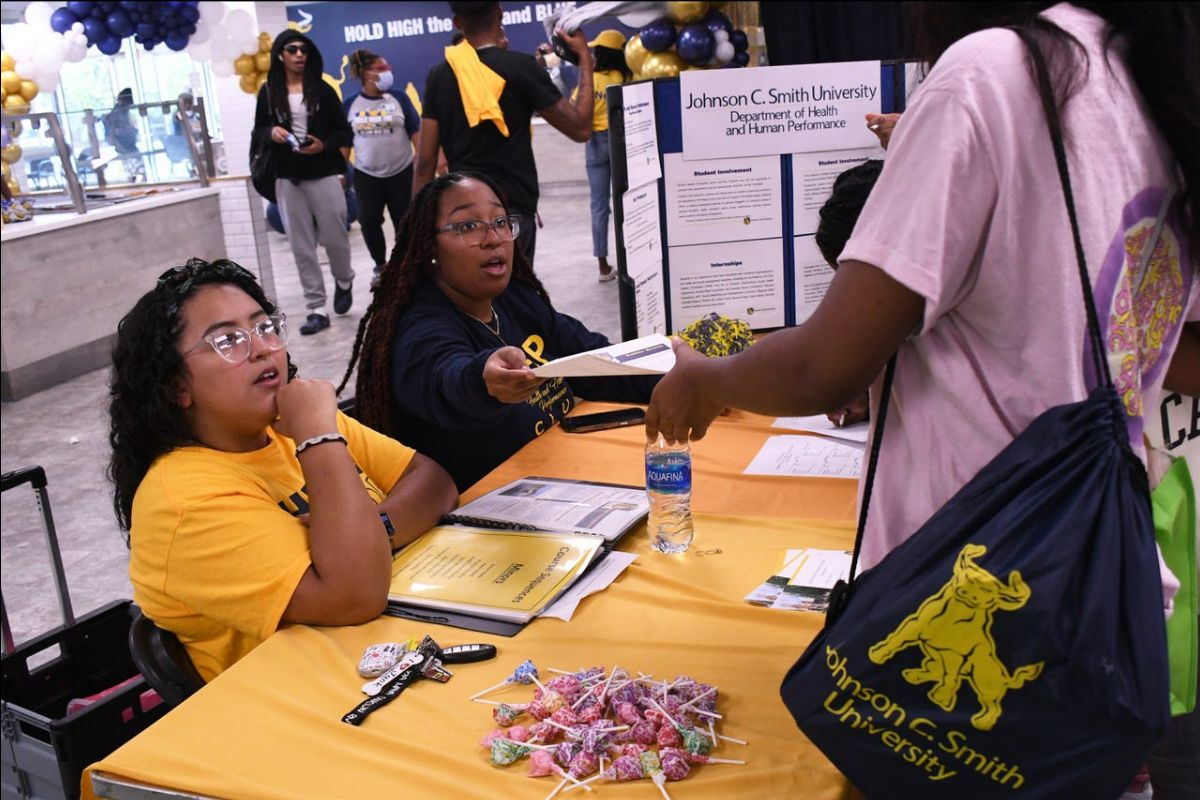 Historically Black colleges in the Carolinas have high percentages of students with federal loans, data shows; taking a ‘deep breath’ at JCSU


Students and alumni of historically Black colleges are likely to be among the biggest beneficiaries of President Biden’s plan to forgive student loan debt.

That’s because students at those schools are far more likely to receive federal loans than peers elsewhere. In addition, their student loan balances are higher, and their average earnings are lower, according to a Ledger analysis of federal loan data from colleges in North and South Carolina.

For instance, at Johnson C. Smith University in Charlotte, 86% of students receive federal student loans, the data shows — the highest figure among the 20 Carolinas colleges The Ledger examined. That’s more than double the percentage of students with loans at Clemson (39%) and N.C. State (41%), more than triple the figure from UNC Chapel Hill (23%) and more than four times the figure at private colleges such as Duke (19%), Wake Forest (18%) and Davidson (15%).

“What you saw was a little bit of relief that will allow current students and students who graduated in the last few years to re-evaluate their financial standing,” said Davida L. Haywood, Johnson C. Smith’s vice president of student affairs and enrollment management. “Regardless of where you fall on the political spectrum, it was a day where some people could take a deep breath, [where] they felt a little bit of the burden lift off their shoulders.”

The burdens of student loans are especially acute at historically Black colleges and universities, known as “HBCUs.” A report from the United Negro College Fund found that HBCU graduates were four times more likely to borrow $40,000 or more than non-HBCU graduates. It explained: “In part, HBCU students borrow more than students from non-HBCUs because African American families generally have lower assets and incomes that limit their ability to contribute toward college expenses.”

There are more than 100 HBCUs nationwide, with most located in the South. North Carolina has four of the 15 largest.

This week, the Biden Administration released details of a plan to eliminate $10,000 in federal student loans for borrowers who make less than $125,000 (or $250,000 for couples). Up to $20,000 could be forgiven for those with incomes low enough to have received Pell Grants.

Controversial idea: The plan is intended to ease the debt burden of most of the 40 million or so Americans who carry student loan balances. Critics say the plan, which is expected to cost at least $300B, is unfair to people who don’t have college loans or who have already paid them off, as well as to parents and students who saved money to avoid debt. Loan forgiveness could also increase inflation and might not be legal.

Haywood, of Johnson C. Smith, says she advises students to apply for scholarships first, then take out loans as a “last resort.” She said colleges still have a responsibility to educate their students in financial literary. The university has 1,200 students, and the undergraduate tuition is just under $20,000 a year.

Students respond: Inside Biddle Memorial Hall at Johnson C. Smith on Thursday, students talked about how the new program will relieve the stress of student debt and allow them to enjoy their time as students.

Jayla DeBoles, a JCSU senior, transferred from a community college and arrived with no student loans. But to attend JSCU, she had to take out $7,500 in student loans last year alone. She said she’s happy to dig out of the “rabbit hole” that is debt.

“I applaud Biden for taking the steps towards helping everyone get just a little bit more free in this world where debt is just literally like a shackle on your ankle,” DeBoles said. “So being able to be freed from that, it just makes me happy. I know my mom’s grateful for it, and actually, she’s a current student here at (Johnson C.) Smith. Now that she has one less thing to worry about, it eases her up to help me so that way I can help my little sister.”

Steven Sullivan, a sophomore at JCSU, said that prior to the announcement, he was worried about paying off his loans and making ends meet.

“It affected me mentally because now you got to think about it as, ‘Okay, how am I supposed to pay this off if I’m struggling to make ends meet at the end of the day?’” he said.

“And like now, if I’m a student and I got to help my parents and take care of my siblings, especially in the Black community where most of us are raised to take care of our siblings and take care of the household,” Sullivan said, “someone who’s actually willing to help all students in general — it doesn’t matter ethnicity, color, race, gender — we should be able to applaud each other.”