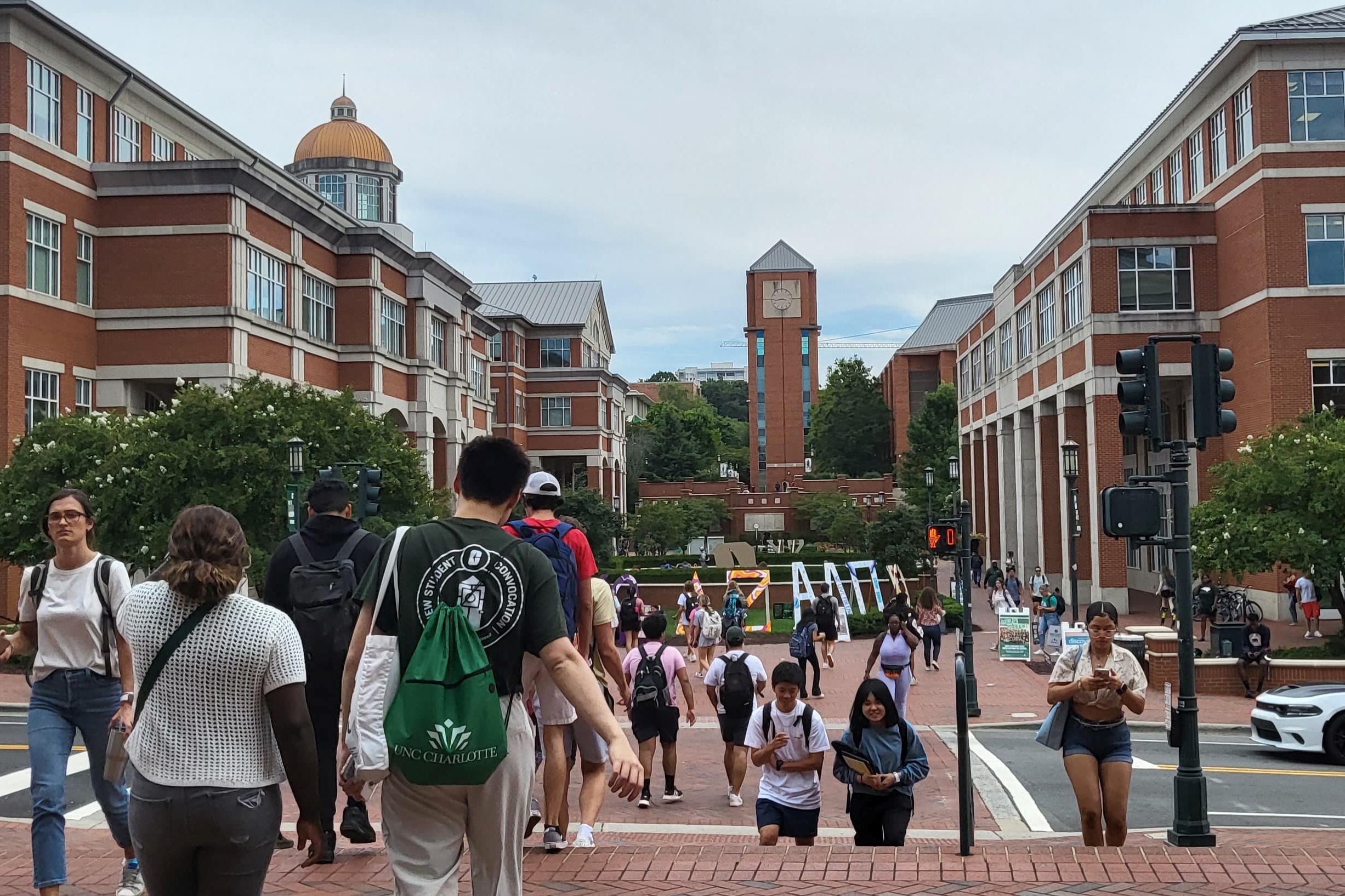 
Until he was approached by a reporter, Chandler Cannon, a third-year music major at Johnson C. Smith University, hadn’t heard about the Biden administration’s plan to cancel student-loan debts for millions of Americans.

The Charlotte native said his family suffered a “big impact” from the Covid-19 pandemic, so news of the debt cancellation came as relief.

“That’ll be a lot of money I wouldn’t be able to have if I did have to pay back those loans,” he said, calling the debt cancellation “a blessing.”

Cannon’s reaction was typical of college students in Charlotte who spoke with QCity Metro in the first hours after President Joe Biden announced his plan. While some students were initially unsure how the loan forgiveness would impact them, others were immediately elated.

Janaiyah Roseboro, a freshman at JCSU majoring in computer science, was one of those who celebrated the news.

“What (Biden) is doing for the community, I really appreciate that,” she said. “I’m struggling right now, and I’m a freshman, first semester.”

Debt cancellation, she said, “would mean a lot to people like me.”

According to whitehouse.gov, students loan debt in the United States has topped $1.6 trillion, and a typical undergraduate student with loans now leaves college carrying nearly $25,000 in debt. For Black students, research shows, that number is significantly higher — in some cases double the amounts owed by their white counterparts.

At JCSU, a private university where tuition, fees, room and board can cost from $26,000 to $28,000 a year, about 86% of full-time, first-time undergraduate students get federal loans to help pay for college, according to a government website.

That same website shows that a typical JCSU student who completes college with an undergraduate degree leaves carrying about $31,000 in federal student loan debt.

The debt-relief plan announced by Biden would cancel up to $10,000 in federal student loans for most borrowers, depending on income limits. Students who received Pell Grant would qualify for an additional $10,000 in debt forgiveness. (At JCSU, about 65% of students receive Pell Grants.)

The White House estimates that 43 million borrowers will get debt relief under the Biden plan, and at least 20 million will see all student loan debt wiped out.

A call for financial literacy

Davida L. Haywood, JCSU’s vice president of student affairs and enrollment management, said she hopes the current debate over the Biden plan will spark a wider discussion about college costs and financial literacy.

“How do you make this investment (in higher education) and do it in a way that’s financially reasonable and wise?” she said. “…This is about teaching them life skills.”

Haywood said she advises students to borrow money for college only as a last resort — focusing first on finding grants and scholarships, which don’t require repayment.

“As you are looking at pursuing higher education, you always want to go for the free money first,” she said.

Haywood, who earned her undergraduate degree from JCSU, said she left the university debt-free. That changed, she said, when she enrolled at The Ohio State University, where she earned a masters degree and then a doctorate from the school’s College of Education and Human Ecology.

“It was a costly venture that I’m still paying on, but I don’t regret it one bit,” she said.

For many students of color, Haywood said, a college degree, despite the rising costs, remains the most viable ladder to economic advancement.

“I don’t think any decision (by the Biden administration) was going to make everybody happy,” she said. “But perhaps this is the start of a real meaningful conversation around how do we continue to empower students who are college worthy and ready to make good choices when it comes to higher education.”

Across town at UNC Charlotte, Arianna Serrah, a finance major, said the stress of affording college makes it harder for her to complete her courses in a timely manner. She described herself as a “super senior” — one who has taken longer than four years to graduate.

“Considering a lot of other countries have free healthcare and other assistance for students, it feels as though it’s about time” for debt relief, she said. “When it comes down to what our educated students attribute to the economy…this should have been done a long time ago.”

Zion Philson, a senior at UNC Charlotte majoring in engineering, said he’ll have lots of student loans to repay after he graduates, so he was happy to hear about Biden’s debt-cancellation announcement.

“I didn’t have too much faith that it was gonna happen,” he said. “I know I’m gonna have to start paying when I graduate, so I’m looking at it like, when I get there, I’ll get there.”