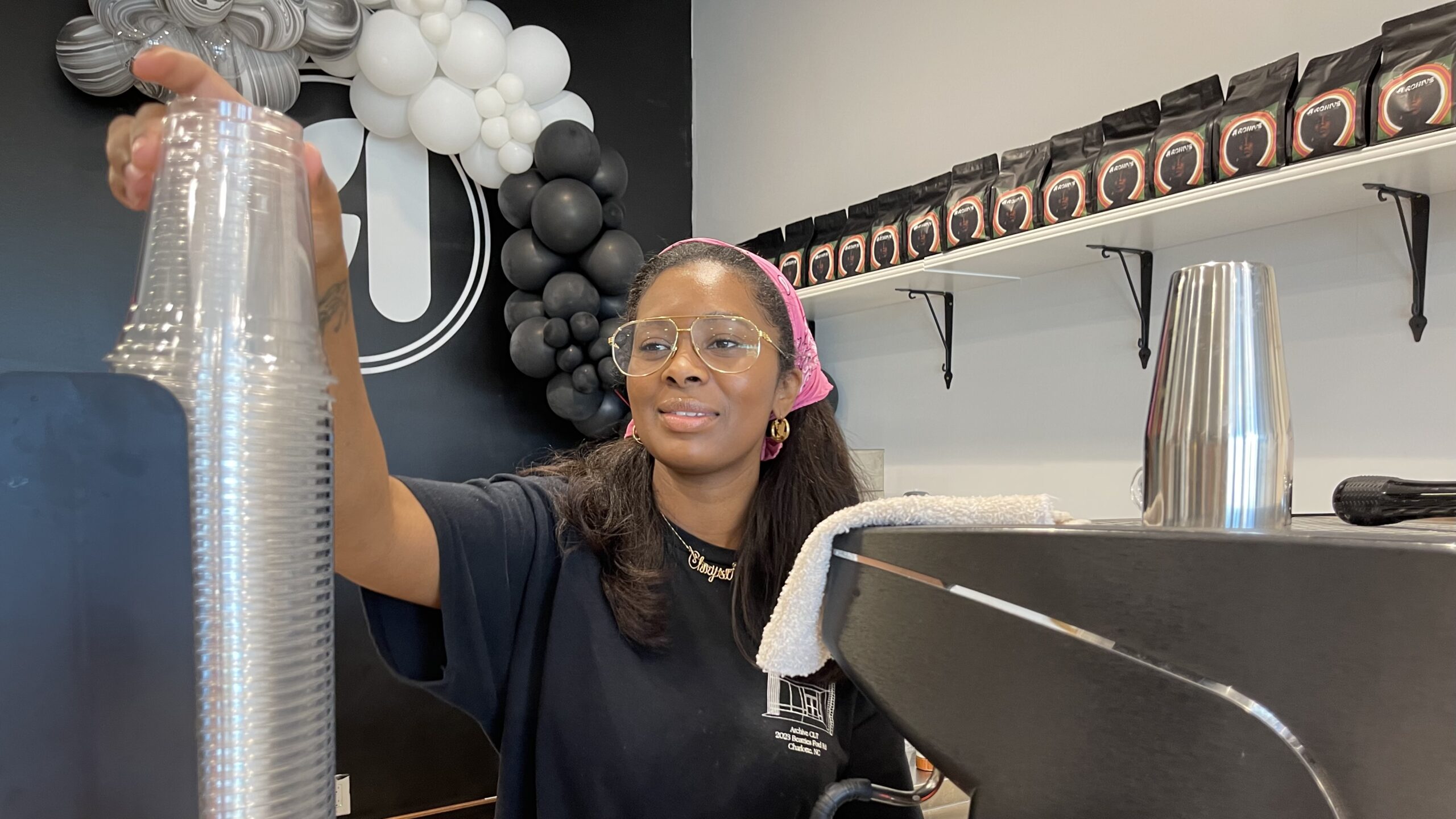 
At age 24, Cheryse Terry lost her mother to congestive heart failure. Left with questions, she sought consolation by collecting Black memorabilia from eras that impacted her mother’s life.

In this way, Terry said, she felt she was able to make sense of her mother’s life and answer questions she had never got to ask.

Now, she’s taken that hobby and turned it into a business.

On August 27, Terry officially opened Archive CLT, a vintage book and coffee store that is dedicated to preserving the history of Black culture.

Terry grew up on the west side of Charlotte on the back end of the 1980s. She was adopted at two days old — her first introduction to repurposing. “Where someone seen me as unvaluable, she seen value in me,” Terry told the hosts of the Jack of All Spades Podcast, speaking of her adoptive mother.

Growing up, Terry was surrounded by antiques that were passed down through her mother’s family. On weekends, she and her family would go thrifting at the Value Village on Freedom Drive, the place where she bought most of her clothes. Although she recalls hating wearing used clothes, her hand-me-down upbringing helped her understand the importance of quality fabrics.

“I was [wearing] wools and real silk. I thought I was just wearing old clothes” Terry said. “When I tried to go shopping at Marshalls and other places like that, I realized this stuff don’t feel the same.”

This led Terry to create Vyntage Dreamz, her first thrift store business, in 2012. She later evolved the business into She’s in the Mood, a stationary and paper goods business. The name was inspired by Terry’s natural abilities to created different things based on how she was feeling.

Around this time, Terry’s mother was battling congestive heart failure and diabetes, two diseases she had been dealing with for a number of years. Terry was supposed to visit her mother after she went in for a sleep test but visited a few hours too late.

“She was like, ‘Be there by 8,’ and I took it for granted and went at 11,” Terry said. “She didn’t even code until 9 (the time her mother passed). That’s why I try to do everything, and when I say I’m gonna do it, I’m gonna live life like it’s my last minute.”

The following year, a heater in Terry’s childhood home caught on fire and burned the home down. A neighbor was able to rescue Terry’s 79-year-old father, but many of Terry’s memories did not make out — photographs, trinkets and other memorabilia.

In the midst of all that happened, Terry began collecting vintage magazines to answer questions she believed she had forgotten to ask her parents.

The birth of a legacy

Terry found many of the magazines online, at thrift stores, at yard sales or estate sales. Many of them were from popular Black publications including Ebony and Jive. Among this collection were vintage letters, vintage yearbooks and vintage novels — some common and some rare.

As Terry’s collection grew, she sold some of it online under the name Black Ephemera, beginning in 2018. Over the next few years, her collection grew so much that she began to come across works she already had.

In February 2021, she created a fundraising campaign, “40k in 40 days,” to build a brick-and-mortar for Archive. Although some were skeptical about the vision Terry had, her focus was on those who supported her.

And in those 40 days, Terry pulled in a little over $40,000 worth of donations from community members. Out-of-state investors also chipped in, which meant Terry was launching the $75,000 project with no debt.

By the end of the year, she began looking for Archive’s home. The original location was going to be on Freedom Drive, but God had other plans. A 700-square-foot space on Beatties Ford Road was available, adjacent to where Terry grew up, and the landlord was Black — everything she was looking for.

What made the location even more sentimental was its history; it once housed McDonald’s Cafeteria, which was a west Charlotte community staple for many years.

“It was like an honor to be in such a space that was already ours and just has been reimagined,” said the now 32-year-old.

Archive was just going to be a vintage bookstore before real estate broker Rodney Faulkner, of Boundary Street Advisors, suggested the idea of selling coffee. Unfamiliar with the coffee business, Terry agreed to take on the idea if it meant bringing in more revenue for the store.

Faulkner introduced her to Tony Santoro of Enderly Coffee to start building the coffee program.

Ironically enough, legend has it that the first coffee bean was found in the forests of Ethiopia, a country situated in northeast Africa.

Terry wanted to ensure that the store illustrated Black excellence. To continue seeing this through, she hired a Black architect, Black contractors and a Black mixologist, Justin Hazelton of Leah and Louise, to curate the non-coffee menu.

The walls and the furniture in the store are black (with a touch of white), similar to the colors used in Terry’s home. In total, the brick-and-mortar took exactly nine months to complete.

To offset Archive’s neutral palette, Terry will display the photography of friends and local photographers to give the store its color.

At the front of the store, a mural painted by Black Charlotte artist, Sade Black and sponsored by Rollup CLT portrays Black pioneers such as Gordon Parks and Toni Morrison, who Terry says inspired her.

Archive’s 12-foot-high bathroom walls are covered in advertisements from Black magazines, a project that took four days to finish.

For generations to come

For one Beatties Ford community member, who’s been in Charlotte since 1968, Archive CLT is a revitalizing sight, and he hopes that the store will encourage solidarity among the youth.

“I like this place because they’re going to redo Beatties Ford Road,” he said. “They need to make it better and try and keep all this stuff down, killin’ the youngins’ and all that.”

Kara Simpson, who traveled from Gastonia to be at the store’s grand opening, believes the store will not only be a community pillar but will showcase Black legacy while building its own.

“People can come here to study, to have meet ups – first dates,” Simpson said. “It’s gonna be a historical place as far as like the legacy of so many people.”

Another, while he was in the store briefly, enjoyed the smells of coffee.

Friends and family are proud of Terry, noting how hard she’s worked to bring this idea to fruition.

Terry’s 13-year-old daughter, Teighlor, will be helping out at Archive by serving drinks and greeting customers.

“I’m looking forward to everybody having a good experience and to make my mom happy,” she said. “She even slept here one time– she put her hard work into this so I’m really proud of her.”

Terry’s vision for Archive CLT? The name is intentional because she hopes to expand the store to other locations in and out of state. She also plans to host community events such as youth book clubs and chess lessons and eventually create a YouTube series featuring local artists.

“Archive is a celebration of the Black experience, but it welcomes everybody,” Terry said.