More than a game: The Aggie-Eagle Classic has history 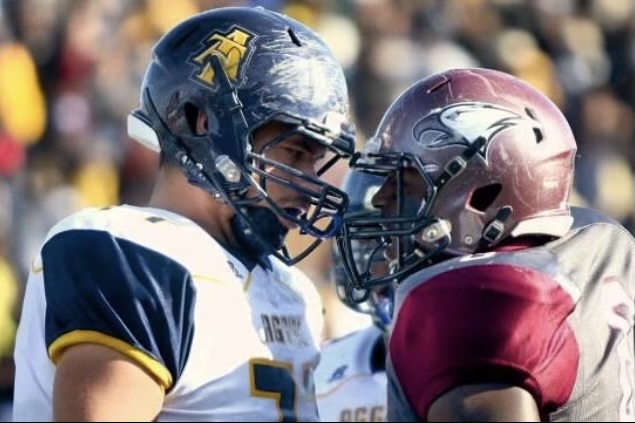 More than a game: The Aggie-Eagle Classic has history


On Saturday, Sept. 3, tens of thousands of HBCU football fans will converge on Bank of America Stadium to watch N.C. A&T and N.C. Central square off in the Duke’s Mayo Classic.

This gridiron rivalry, known culturally as the Aggie-Eagle Classic, is a century-long feud between the state’s two largest historically Black colleges.

This year’s game will be especially special. Not since 2008 have the two team played in a neutral location. They also will be the first HBCUs to headline the Duke’s Mayo Classic, which last year featured college football powerhouses Clemson and Georgia.

As any true fan will tell you, the Aggie-Eagle Classic has led to countless highs and lows — a rivalry that has split households, friendships and even communities — bestowing bragging rights to the winning school, at least for a year.

The rivalry has grown beyond sports. The close proximity of the two schools — just 55 miles separate them — has also led to a competition for students.

Danny Morrison, executive director of Charlotte Sports Foundation, which hosts the Duke’s Mayo Classic, said his staff understood the significance of the Aggie-Eagle rivalry when the foundation decided to book the teams.

“With this in mind, we hope to create a weekend that not only is a celebration of these two schools but leaves a lasting impact on all who attend the Duke’s Mayo Classic,” he said in a statement.

As of Aug. 3, fans had snapped up more than 24,000 tickets, according to the foundation.

While some have said the first Aggie-Eagle game was played on Nov. 22, 1924, and ended in a 13-13 tie, recent studies have proven otherwise.

According to the Bluford Library Archives, the rivalry began years earlier, on Nov. 23, 1922. That first meeting saw A&T College defeat the Durham State Normal School for Negroes 26-0 at Dudley Field in Greensboro.

According to the American Football Database, Aggies Head Coach Lonnie P. Byarm lead his team to a four-game winning streak against the Eagles — from 1925–1928 — and a CIAA Championship in 1927.

The Eagles bounced back, taking control of the series in the 1930s, when they were led by head coaches Bryd D. Crudup (1929–31) and Leo Townsend (1932–35). Under their leadership, the Eagles evened out the series with four wins by the end of the 1933 season.

From 1934 to 1949, the Aggies resumed their dominance, winning nine out of 14 games against the Eagles.

After a fight during the 1950s, the game was moved to Duke University’s Wallace Wade Stadium. It was there, at Wallace Wade, that a man drove his car onto the field during a game and parked on the 50-yard line.

In a recent documentary about the rivalry, Dexter Feaster, a former A&T player (1974-1977), recounts that incident, recalling that a man wearing a burgundy and gray suit drove his burgundy and grey Pontiac LeMans onto the field.

“That’s how I knew how crazy and wild it would be to play North Carolina Central,” Feaster said in the documentary.

In 1970, NCCU and NC A&T were among the seven HBCUs that founded the Mid-Eastern Athletic Conference (MEAC).

The two foes continued to battle throughout the 20th century, but it wasn’t until 1994 that the game was billed as the Aggie-Eagle Classic.

Carter-Finley Stadium at N.C. State University eventually became the neutral site for the annual game. North Carolina A&T won the first matchup there 38–9 and held a 10–2 edge in those meetings. It wasn’t until 2002 that the Eagles would earn their first victory there, a 33–30 overtime win.

The series ended when the contract with the city of Raleigh was not renewed, causing the game to be scrapped in 2006. It resumed the following year, in Greensboro, and then in Charlotte’s Memorial Stadium, with the Eagle winning both games.

The storied rivalry intensified when NCCU rejoined A&T in the MEAC in 2010.

The two teams were co-MEAC Champions in 2014 and 2015, but in 2016, NCCU held the title alone. The Aggies would go on to claim bragging rights and the conference title for the next three years.

Only five times has the Aggie-Eagles game been canceled or unscheduled — in 1929, in 1943 and 1944 because of World War II, in 2006 when the Raleigh contract ended, and in 2020 because of the Covid-19 pandemic, according to Bluford Library Archives.

In 2020, after the Aggies announced that they were leaving the MEAC to join the Big South Conference, the two teams signed a 10-year deal to ensure that the games continue.

This year’s game will be the 100th matchup between the two teams. The Aggies hold the advantage with a 55–34–5 record and have won their last four meetings.

A rivalry beyond the field

For Nigel Williams, the Aggie-Eagle rivalry extends beyond football. From 2017 to 2021, he played in NCCU’s marching band, the Sound Machine. Williams never saw his school beat the Aggies in football, but he said the NCCU band always focused on outshining their rival in a different way.

“In our heads, no matter how the team looked on the field, we were going to outplay them from an instrument standpoint,” he said.

Williams said his favorite memory came his senior year, when his band challenged the Aggies to a battle before halftime after members of the Blue & Gold Marching Machine started trashing-talking.

“Our drumline played a quick cadence and they stopped talking,” he recalled. “The crowd called for them to respond, but they didn’t do anything.”

Gregory King, a 2015 graduate of A&T, has more love than hate for the Eagles. He remembers getting accepted at NCCU but decided on A&T, intending to pursue a degree in mass communications.

“Central has always had a special place in my heart because most of the women in my family attended the school,” he said. “They didn’t treat me any different for my decision, because HBCU pride is very strong in my family.”

Kings said he tries to recruit new Aggies every chance he gets. He said the Duke’s Mayo Classic will not only shine a light on his school but educate students about the importance of all HBCUs.

“A lot of kids now aren’t motivated to go to college, but seeing this rivalry can show them that you can go to a HBCU, get an education and make something out of yourself,” he said.

Before going to NCCU in 1995, Juan Richardson, who grew up in Roanoke Rapids, had never heard of the Aggie-Eagle rivalry. But after witnessing a packed Carter-Finley Stadium, he came to understand how big the games are.

“To see that many Black people there, blue and gold on one side and maroon and grey on the other, it was amazing,” he said.

Richardson has worked as a volunteer and photographer for the school band for the past 22 years. After being on the sideline for more than two decades, he said, the rivalry has never lost its spark.

“When you talk about Central and A&T, you’re talking about the Carolina vs Duke, Red Sox vs Yankees of Black colleges,” he said. “Just like those rivalries, when it’s those two versus each other, anything can happen.”

In uptown Charlotte, in the shadow of Bank of America Stadium, an Aggies flag is planted in the front yard of a home where Morgan Hinton lives. She said she knew the risk she was taking by going to NC A&T in 2008, because most of her family members are NCCU graduates.

“My freshman year, when we lost to Central, I was so distraught. I was hurt,” she said. “They talked so much junk to me like no other.”

A Charlotte native, Hinton said having this year’s game televised as the Duke’s Mayo Classic will have an impact beyond the two schools.

“This is major for all HBCUs,” she said. “This is our history.”