Mr. Pull Up: How one traveling barber is taking it to another level 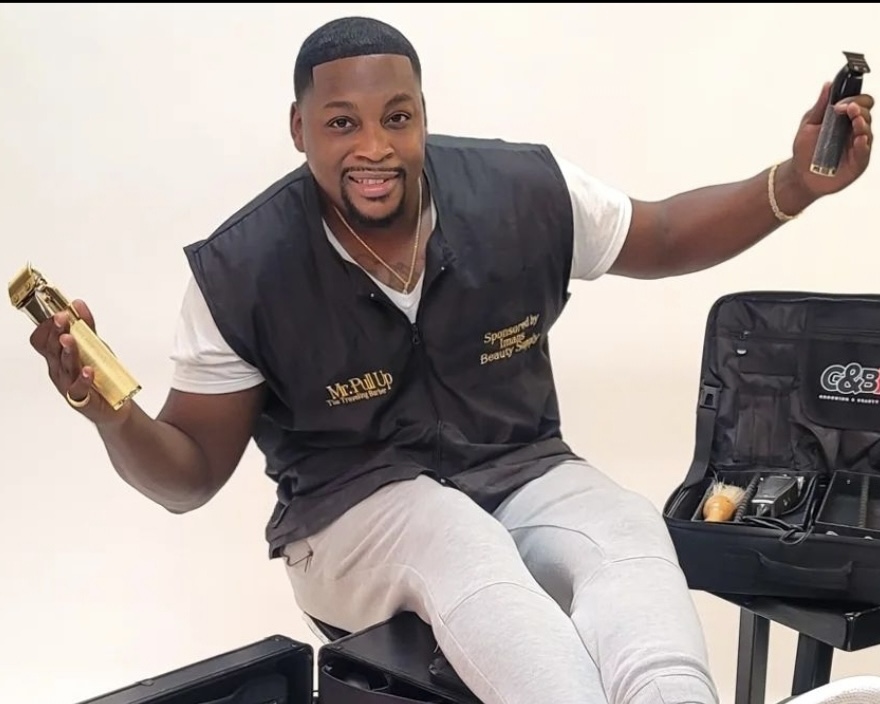 Mr. Pull Up: How one traveling barber is taking it to another level


Lots of barbers have become accustomed to traveling to their clients, but one Charlotte Barber has taken it to another level.

Ja’Derrio White, 34, is known on social media as “Mr.Pull Up.” He has become known to meet his clients anywhere they are, from a workplace to the gas station and even in front of Bank of America Stadium during a game.

White, who has over 17,000 followers on Instagram, has made a reputation for himself for his unique cutting location and comedic barber shop skits.

“People started noticing me because my content was entertaining,” the 34-year-old native of Rock Hill, S.C. told QCity Metro. “They’ve never seen a barber really do what I do.”

How the journey began

White’s interest in barbering began when he was 13-years-old and was often disappointed in the work of his own barber.

“There was a guy named Mr. Wilson, who used to mess my hairline up,” he said. “After a while, I decided that I wanted to do it myself.”

He got his own clippers and began cutting his own hair. He eventually started cutting his friends’ hair for free.

White said he never saw barbering as a full-time career but would cut hair as a side gig.

It was in 2013, while working at Ashley Furniture, that White earned his first celebrity client, then-Charlotte Hornets center Bizmack Biyombo.

White’s coworker, who was Biyombo’s girlfriend, was impressed with White’s work and told the NBA player to set up an appointment the next day.

White went to Biyombo’s house and cut his hair. Impressed by his cut, he began to advertise him to other Hornets players, like Kemba Walker and Dwayne Bacon.

A year later, He decided to pursue a career as a barber full-time and enrolled in barber school.

After graduating, White worked in a barber shop for a year, but decided to become a travel barber in 2015.

He said it was challenging, at first, to gain consistent clientele. He would charge as low as $10 for a haircut just to grow his client base.

“I really didn’t know my worth then,” he said, “I was just grinding, trying to be successful.”

White made it his mission to stand out from his competition by cutting anywhere. He cut one of his first travel clients at the client’s job.

“There was one guy who asked for a cut, but said he didn’t get off until 6,” White said. “I told him that I could come to his job and I ended up cutting him at the office on his lunch break.”

He would cut hair at gas stations, parking lots and various locations across the city. He even cut one clients’ hair in a cow pasture.

“The cows were actually walking by throughout the video,” White said. “That was so dope to me.”

He posted pictures or videos at each location on social media. He would also do comedic skits. The videos gained popularity online and led to new clients.

White said he received mixed reactions for his business strategy. Some people called it “ghetto” while others commended him for his work ethic, he said.

He began traveling across the country to new clients and attracted a few celebrities, like comedians HaHa Davis and Leonard Outzs and NFL linebacker and fellow Rock Hill native Jadeavon Clowney.

In October, White started waiting in front of Bank of America Stadium to get new clients. He cut ten customers on the first day.

While he was being noticed by Panthers fans, what he didn’t know was that word had spread into the team’s locker room.

Panthers defensive back Gavin Heslop reached out to him.

“He told me that he and some of his teammates had saw me outside the stadium when they were leaving so he decided to reach out,” he said. ” Three days later, I cut his hair.”

White has found new clients in other notable locations. He cut hair at the Revolt Summit and the BET awards this year.

He said he hopes to one day be able to cut the hair of Will Smith, an actor he’s always admired as a kid.

More than a haircut

Though he has famous clients, White continues to cut hair in the community, sometimes for free.

He reached out a young man with alopecia and gave him a free hair treatment. He installed hair units in his eyebrows and head.

“Tears started coming in his eyes. He was really happy because he hasn’t had hair since he was nine years old,” he said.

White, a soon-to-be father of three, said his kids enjoy seeing him cut the hair of their favorite celebrities or see him on TV.

He said it’s difficult at times to be away from his family. He plans to stop traveling in the future and open up his own shop.

To book an appointment with White, call or text 803-415-9874. Keep up with his next location via Instagram or Facebook.