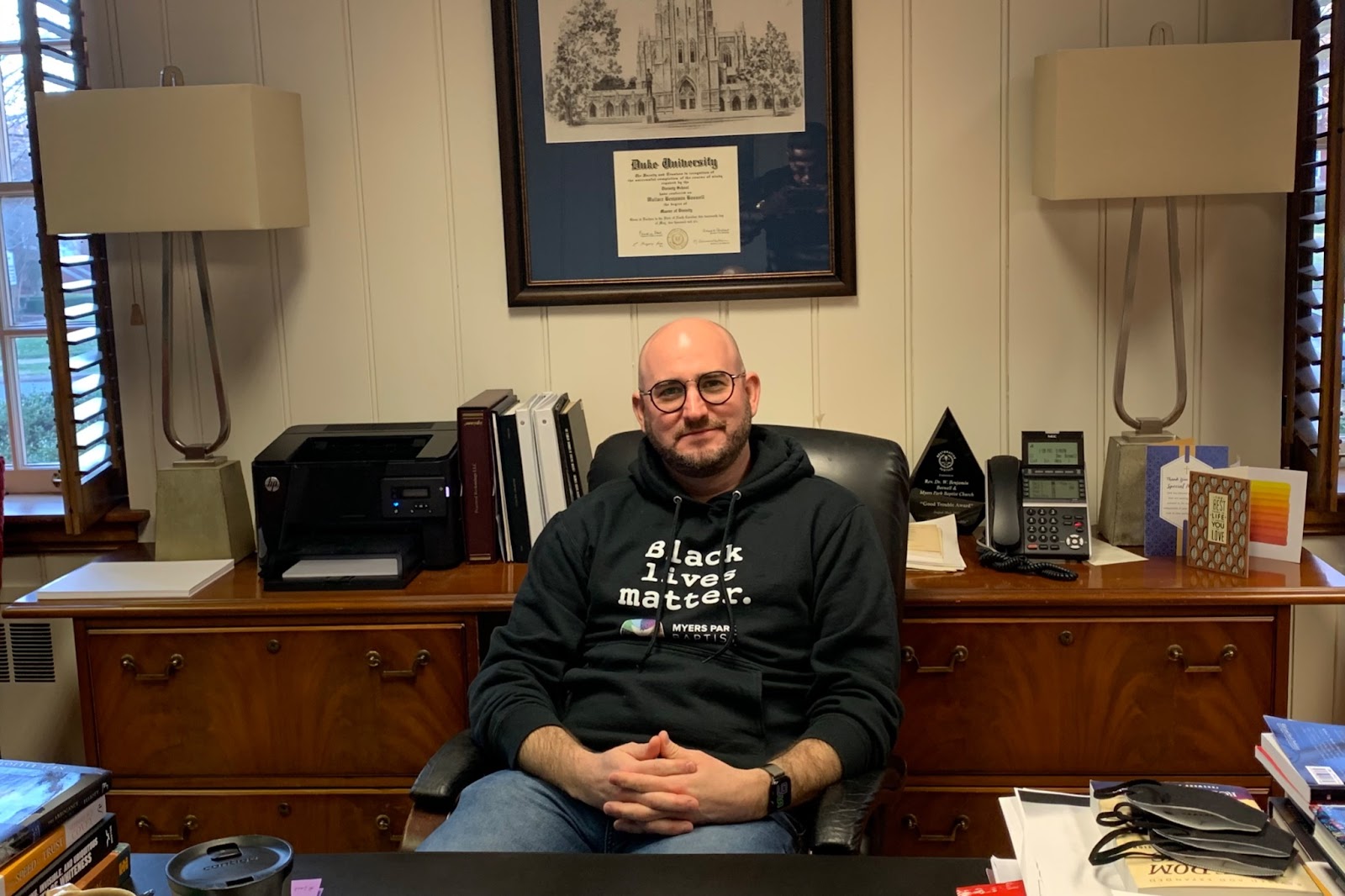 
At a time when some politicians are supporting “anti-wokeness” and pushing back on the idea of Critical Race Theory, one Charlotte pastor is embracing it.

Rev.Ben Boswell, pastor of the predominantly white Myers Park Baptist Church, wants his congregation and the white community to address racism by “confronting their whiteness” through self-examination.

He is so committed that in 2021 he created a conference called “Confronting Whiteness.“ At the conference, white people are invited to gather and learn from the work of Black creatives and scholars, self-examine their own views and discuss race.

“Black lives are more important than white feelings. So if it comes down to a choice between feelings and lives, we choose lives,” the 42-year-old said.

“It doesn’t mean your feelings are not important. But we are not gonna prioritize your feelings in a way that leads to continued premature death for the black community.”

It will include discussions from Black scholars on race, breakout sessions, and a pop-up market featuring local Black-owned businesses, food trucks and artisans.

The 42-year-old pastor said before he took over in early 2016, the church had always been on the forefront of racial injustice issues throughout its nearly 80 years of existence.

He planned to continue that work, but the events of 2016 – including the death of Keith Lamont Scott and a contentious presidential campaign – made him realize that more work needed to be done internally.

Boswell felt that there needed to be more discussion about racial injustice and invited social activist Rev. William Barber to speak one Sunday.

Barber’s message, which focused on race, was met with mixed feelings from the congregation, Boswell said.

“​​The reaction of our members was very strong in opposition. Not everyone, but some folks were very upset with it,” he said. “It helped reveal to me that for every step of progress that we had made, we had also stepped backwards.”

Boswell said he struggled figuring out how he could get through to his congregations. It was a course he created for his doctorate degree in divinity that gave him the inspiration.

The course was titled, “Identifying Whiteness,” where Boswell spent 9-weeks reading, hearing and watching the work of Black creatives to understand how white people are viewed from the lens of the Black community.

Boswell said the experiences opened his own eyes to a new perspective that he wanted his members to experience.

He was hesitant to offer the course to his members so soon, but the murder of George Floyd pushed him.

To address this tragic murder, white clergy leaders came together to share a statement. Boswell said the statement was “basic” and felt it needed to address the issues of systematic racism and white supremacy.

He partnered with other white faith leaders who agreed and decided to write their own.

“We issued a call for white people to come and do the work with us, and that’s how we got the first group to go through this course in July of 2020.”

Boswell called the course, “What Does it Mean to be White?” where white participants met locally in small groups over video calls.

Over 170 people signed up for the initial course. Since 2020, over 400 people have participated in the course, he said.

Boswell has led thirteen courses and trained 30 facilitators to teach the course at churches locally and nationwide.

The course is published as a curriculum for people to purchase online.

The conference expansion, Boswell said, is open for anyone to come and learn.

Boswell said that not all of his members have accepted the program, but he hopes he can get through to them and other white people in the community.

In an interview Q&A with QCity Metro, Boswell talked about the criticism he’s faced, his progressive approach to worship and what he looks forward to about the conference.

Answers have been edited for brevity and clarity

This church has been in the forefront against racial injustice issues for decades. Why was it important for your congregation to participate in your course?

We had been blind to aspects of racial work that we needed to do individually as people who were racialized as white. It’s important for us to take a step back to look in the mirror and learn.

How many members do you have and how many have actually taken part in the course?

There are at least 1,600 members in my congregation. Nearly half of the more than 400 participants who have taken part in the course were members. There obviously is still more work that needs to be done.

Has there been push back from members when you encourage them to participate in your course and/or conference?

I’ve been accused of having an obsessive focus on racial justice. We have lost members because of my passion and focus on this.

On the positive side of that, we’ve also gained members from this, and the members who we tend to be gaining are mixed race families and/or black families.

How often do you preach about social justice in the pulpit on Sunday?

I probably preach more than they’d like to hear, and I’ve heard that from them. They’d rather have more of the touch and feel-good sermons, some of them. But for the most part, probably 80%, my congregation knows that every week they’re gonna get a strong dose of justice.

I’m not gonna pull any punches. I’ve talked about whiteness and white supremacy and systemic racism and capitalism, and all forms of oppression in my sermons. Many different times. Many different ways.

You preach inclusivity and have opened your doors to people who may be a part of the LGBTQ community, despite the conservative views of other churches. Have you received backlash from other pastors?

Oh, yeah. The folks at Freedom House, across town, don’t like us very much. There is no freedom going on at Freedom House, in my opinion. I’m sad that the clergy, they feel the need to come after us for the work that we’re trying to do. It’s disappointing to see other clergy feel like they need to do that.

Most of the clergy in the city that I know, while they may not be where I am, they may not be able to say what I say in our church, they’re with me in spirit and in truth.

What do you tell people when they oppose how inclusive you are?

That’s part of what he got killed for. The message and the mission of Jesus is what guides our church. We are completely and totally inclusive of all people because of Jesus, not in spite of Jesus.

As a pastor, how do you deal with people who oppose the teaching of critical race theory and “anti-wokeness”?

White people will always default to living in denial, rejecting the truth of the reality of history. The attacks on critical race theory are just another form of white denial.

How has outreach been with Black faith-leaders and churches with social justice issues?

I’ve worked with a lot of black colleagues in the city on different things. Bishop Tonyia Rawls from the Freedom Center for Social Justice is a really important colleague of mine. Dr. Peter Wherry from Mayfield Memorial Missionary Baptist in Hidden Valley is a very important colleague of mine. He and I are extremely close. Our churches have worked together. We’ve traveled to the Deep South together. I’ve worked with a number of others as well.

When it comes to movement work, we try to follow their lead and not try to get out in their way.

What would you think Jesus would think of the current political environment?

I think Jesus would think about it similar to the way he thought about his own time. You had King Herod who was ruling in an oppressive way. There was economic oppression toward all people who were not a part of the elite class of his cabinet ministers and high priests of the temple.

I would say that Jesus would have a very, strong prophetic proclamation about the moment we’re in.  I also think what the church misses is that Jesus’ primary focus was always for the poor, marginalized and the oppressed, widows, orphans, foreigners, the sick and prisoners.

Jesus would be in solidarity with those folks in a way that we can’t possibly understand in our world today.

For those who can’t or chose not to participate in your course and conference, what is the simplest practice for confronting your whiteness?

This course has changed the lives of the members of our church, and it has the potential to change their lives too, if they’re willing to go through it.

If they’re not, they don’t have time. I hope they’d come and support the people who are on this journey. Because part of what it means to be a church is to support each other as we journey on the faith together.

Tickets can be purchased via Eventbrite.

Virtual and in-person options are available for attendees.