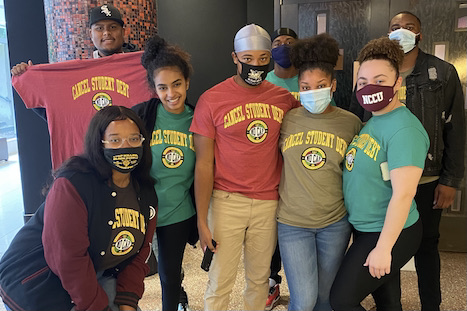 On Friday, member of the delegation, organized by NoCap, a statewide racial and social justice organization based at the campuses of historically Black colleges and universities, were scheduled to speak alongside U.S. senators and representatives at a rally.

The N.C. delegation also was scheduled to meet with other students and advocates to push their efforts nationwide.

Why it matters: According to researchers from educationdata.org, 42.9 million Americans owe a total of $1.73 trillion in student loan debt, with an average of $36,510 in federal loans.

On Capitol Hill, U.S. Rep. Alma Adams has been a leading advocate for eliminating student loan debt, a move President Joe Biden has not fully supported. A proposal that would have reduced or eliminated student loan debt was stripped from a Covid-19 relief bill last year as the two major parties negotiated the legislation. Still, a number of HBCUs earlier this year used a portion of their Covid relief funds to cancel some education-related debts held by their students.

Israfil Brandon, a NoCap organizing fellow at NC A&T, said students are “tired of piecemeal solutions.” He called the issue one of racial justice.

“In my community, we already face economic challenges,” he said in a statement. “College is often the main access point for many basic necessities, including housing and food. As an HBCU student it’s my duty to be out here.”

NoCap organizers who traveled to D.C. took with them specific demands, including:

In preparing for their Washington trip, the students worked with Generation Progress, NAACP Youth & College and other national organizations.