Six questions for Ernie Suggs, author of ‘The Many Lives of Andrew Young’ 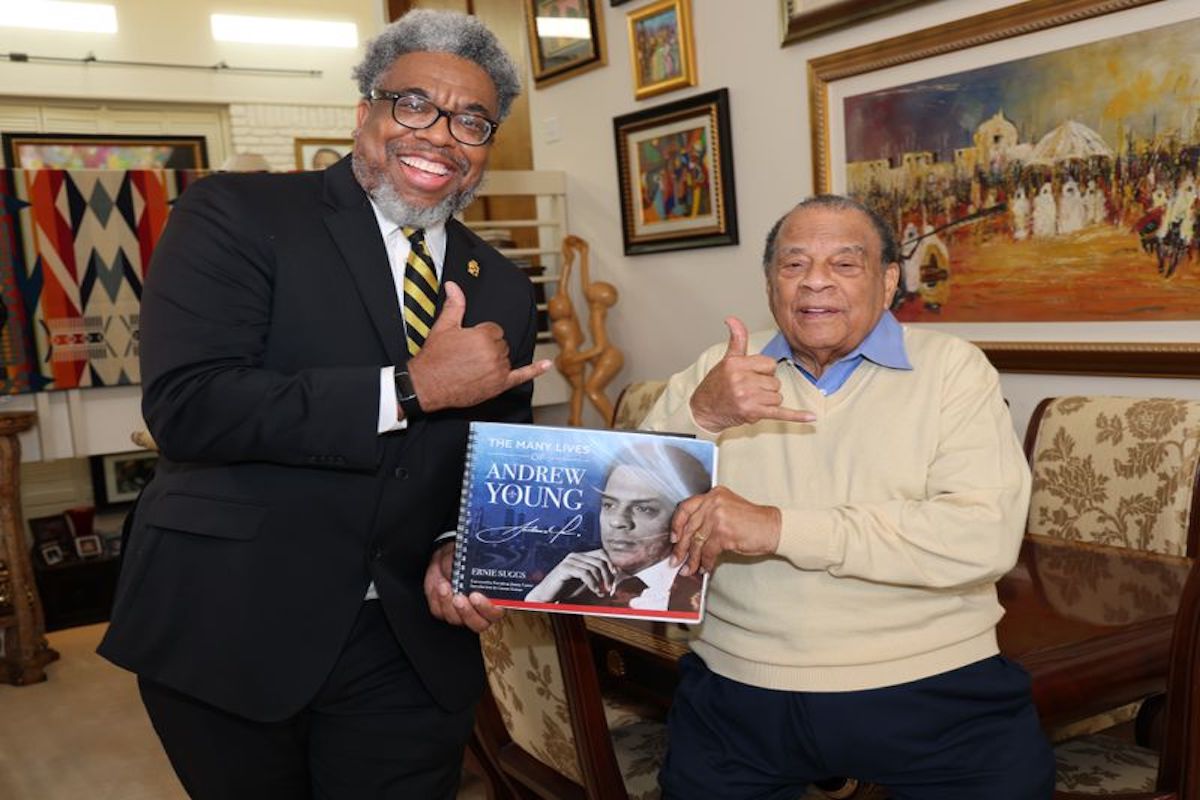 Six questions for Ernie Suggs, author of ‘The Many Lives of Andrew Young’


Not everyone can count civil rights icon Andrew Young as a “father figure.” Journalists Ernie Suggs can. The two met in the 1990s, shortly after Suggs graduated from North Carolina Central University. Years laters, after Suggs moved to Atlanta, the two developed a deeper relationship.

Suggs and Young have now embarked on a national tour to promote a new memoir, “The Many Lives of Andrew Young,” which Suggs wrote during the pandemic.

On Thursday, Nov. 3, the tour will stop at Johnson C. Smith University for a sold-out conversation.

At age 90, Young is one of the Black, male icons featured in the Smithsonian’s “Men of Change: Power. Triumph. Truth.” exhibition, hosted jointly by the Harvey B. Gantt Center for African American Art + Culture and the Levine Museum of the New South.

Young is often credited with helping grow Atlanta into an economic power, bringing in thousands of jobs, new businesses and billions of dollars in investments, according to a biography written by Georgia State University.

Suggs said he decided to write about Young after realizing that many of the civil rights icons are passing.

QCity Metro spoke with Suggs ahead of his Charlotte visit to talk about his inspiration for the book and what attendees can expect.

How and when did you meet Mr. Young?

I had just graduated from North Carolina Central University in 1995 when I met Mr. Young at a bookstore in Durham. He had just published his first book and was doing a book signing. Two years later, I moved to Atlanta to cover race and culture for the Atlanta Journal-Constitution, and he became one of my sources for information. I’ve known him, since then, for about 26 years.

What about Mr. Young inspires you?

Why did you choose to write about him?

When I moved to Atlanta, Coretta Scott King, Hosea Williams, John Lewis and other civil rights leaders were still alive. Mr. Young was one of them, and I knew him in several different roles. I had always wanted to write a book about a civil rights leader, but I never got around to it. During the pandemic in 2020, we lost John Lewis and a few of our other leaders. I approached Mr. Young and I was like, “Look, let’s get together and write a book about you.” He agreed to it because he understands the importance of legacy.

How long did it take for you to publish the book?

The whole process took about a year, which is very fast for this type of book. We originally wanted to get it out by his birthday in March this year, but there were a few delays and it came out in April. We traveled to different libraries that had his papers and archives and talked to different people.

Let’s talk about the book tour. What are some of the points discussed?

The conversation has evolved on its own over the course of the tour. The conversation is less about the book and more about him. We discuss his life and whatever may come up in the conversation. We also talk about what may be relevant to the current times through the lens of who he is. When we stopped in Dallas, for example, we talked about the Pelosi attack, Raphael Warnock, Stacey Abrams and Herschel Walker.

Do you plan to turn the book into a movie or documentary?

Yes, I would love to. We are currently talking about some documentary-type stuff, although a movie would be fantastic. We are looking for ways to continue telling the story, so whether it’s a documentary, another book or a graphic novel, we are exploring all of our options.