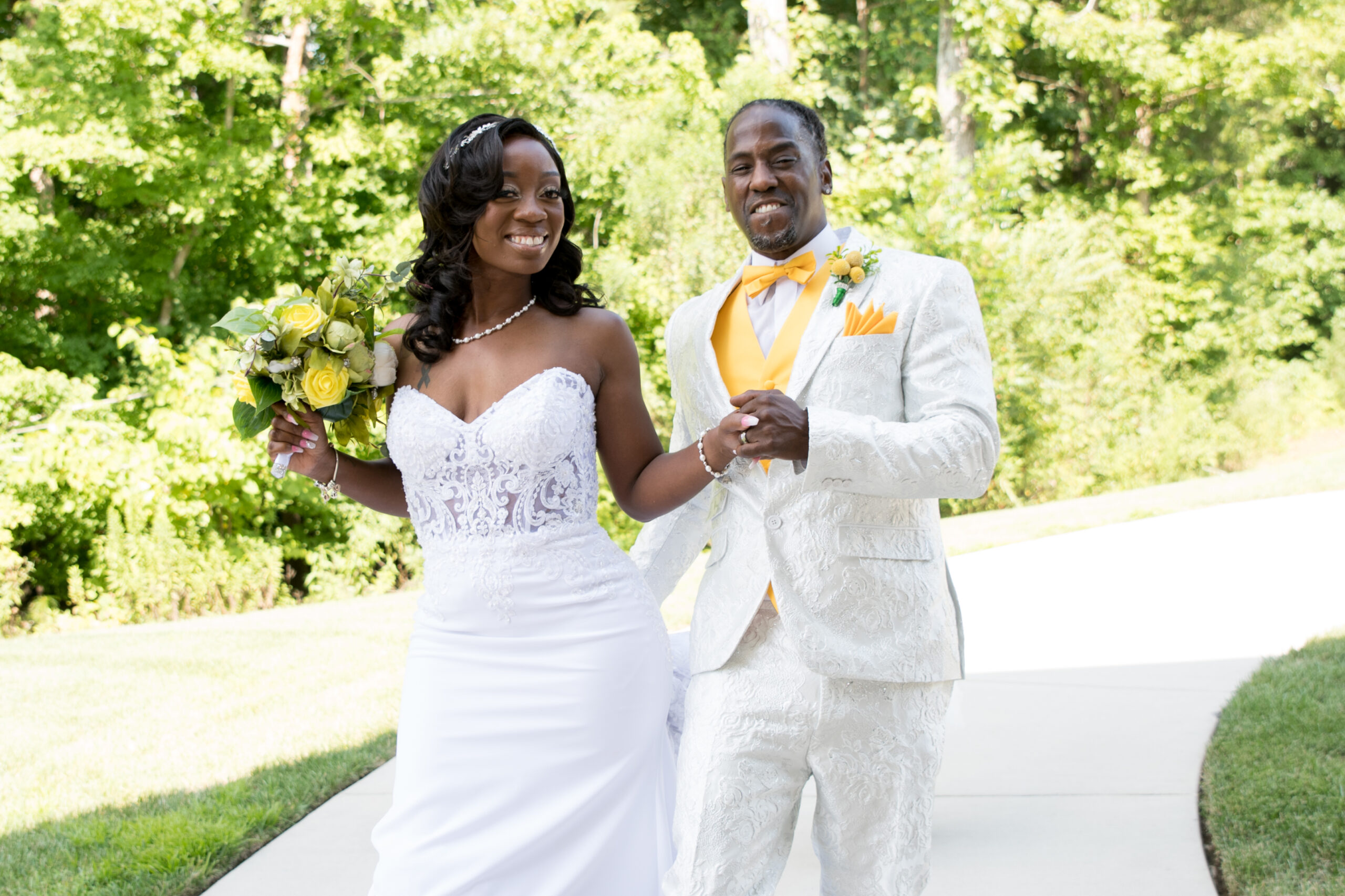 
Like a Princess in a fairy tale, Krishunda Agurs arrived at her wedding in a white, horsed drawn carriage. But that’s not where her fairy tale ends. Before that day, there was a damsel in distress in need of being rescued by a handsome Prince. Krishunda tells their story.

We met in 2016 at Sam’s Club in Rock Hill. Michael was coming in to buy supplies for his business. My job was to know the different business members who shopped with us. We talked and he gave me his business card, but I didn’t call him. The next time he came in, he told me that his business involved detailing cars and said that I should bring my car in to him to be cleaned. He gave me his phone number. I finally took my car to be detailed about two weeks later. We’ve had a relationship ever since.

We started going out about three months later, having conversations and getting to know each other. On our first date we went out to eat at Cheddar’s Scratch Kitchen in Charlotte. We ended up sitting and talking for three hours. We shared information about ourselves like our childhoods and I told him what it was like for me growing up in Las Vegas. He told me about his family and what it was like for him growing up here. It was really nice, and he was a perfect gentleman.

In September of 2017, after dating for only ten months, I was diagnosed with stage three colon cancer. It was early in our relationship and a lot of people would have left since there was no real commitment yet. But he stayed, and he was there with me through all the surgeries and treatments. He was a big part of my support system while I was going through it all. I have been in remission for nearly five years, but I will also remember and appreciate the love and support he showed. That was when I knew he was the one.

Michael told me that he knew that I was the one after we had an argument. In every relationship you go through disagreements, and we are no different. Following this disagreement, he went out to clear his head. He said he realized he was afraid of losing me and couldn’t picture his life without me. The next day, he proposed.

Everybody that I work with knows who Michael is. I was in the back of the store when the greeter came and got me. She said she wanted to talk to me, but I needed to walk with her while we talked. I said, “okay.” So, we began walking to the front of the store, towards the exit. Suddenly, Michael came in.  He started telling me how much he loves me and that he didn’t want to live the rest of his life without me. He was crying, eyes full of tears, in front of everybody. He got down on one knee and asked me to marry him. I was in total shock.

I didn’t know what to say. I said yes but afterwards, I couldn’t function anymore and had to go home. We had discussed marriage before, but it was just a topic for conversation. We talked about things like where we saw the relationship going and what we would want to wear if we got married but there was never a timeframe attached. So, the proposal was a spur of the moment surprise.

Wedding planning was exciting, frustrating and hard. We planned the entire wedding in the shadow of the COVID pandemic. I had booked my venue before COVID hit, so that was set. Everything else was difficult to schedule as other couples were trying to reschedule events they had been forced to cancel. Meetings with vendors were virtual, so instead of meeting somewhere and sitting down and having coffee, I had lots of Zoom calls. I would have to wait until the last minute to take a break and be able to sit in on these meeting.

We learned a lot of different tools to use during marriage counseling with our pastor. I liked the food tasting and cake eating part. The toughest part was deciding on colors.

We got married on Michael’s 50th birthday. It was an amazing, fairy tale wedding. Our wedding ceremony was outside in the pavilion. The landscaping is so beautiful we didn’t have to do very much decorating. I was driven to the pavilion on a horse drawn carriage, which was beautiful. The carriage traveled up the driveway and circled the parking lot before stopping to allow the best man to help me down and escort me to my father. The most memorable moment for me was walking down the aisle with my father and seeing Michael in tears waiting for me. Michael said he loved it all.

The reception was inside. Everything fell into place perfectly. We danced all night, and you could just feel the love in the room. I have never experienced so much love in a single space, from both our families. There were a few little hiccups here and there but nothing so drastic that I was completely panicked. Everything and everybody looked great. I still look at our pictures to this day and I’m on cloud nine.

We went on a little getaway to Myrtle Beach for four days. We want to buy a house, so a more extravagant honeymoon will have to wait, maybe until our anniversary. It was good to be alone and have some time together after being around all of our family and friends. We enjoyed the time together, food, and hanging out at the beach. I was happy with that.

Hire a planner. I honestly feel hiring Cindy was the best thing I could have done. It can get overwhelming, and she was there to help. They know what needs to be done and have great resources. They know what vendors are best. Also, if you don’t connect with your vendors quickly, find someone else.