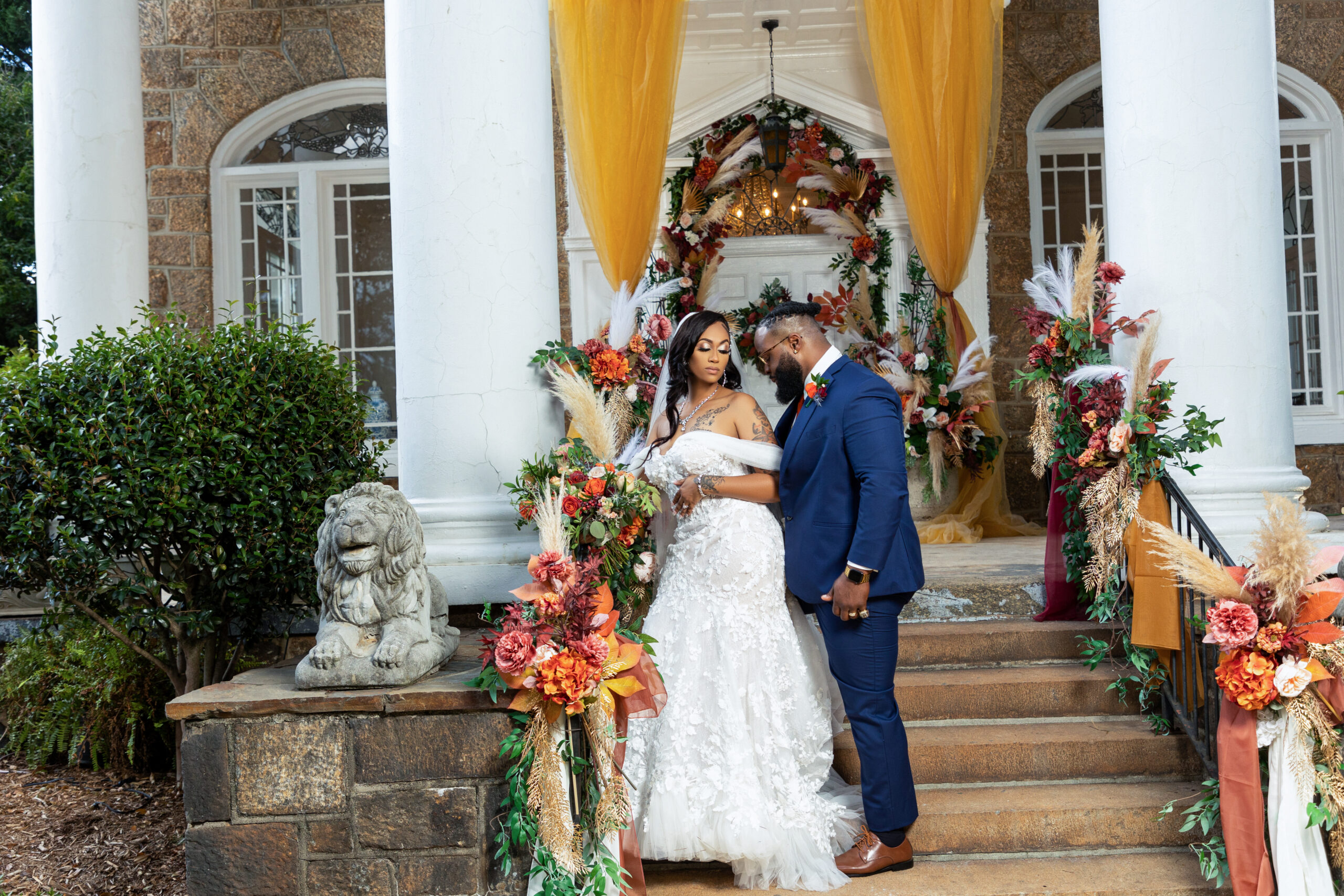 
Three weeks into their relationship, Chesnee was sure that she had met her future husband. That’s when she started making plans for their big day. This is her story.

I met Troy in 2017 on social media. He had posted a video of himself on Instagram singing a song that I absolutely love, ‘Brown Sugar’ by DeAngelo. I commented on the post saying that it was my favorite song. After that, Troy started loving and liking all my posts. He also started commenting on my stories. I could tell he was interested but I wasn’t in that space. I was a single mom with kids who had experienced a number of failed relationships. I was just not feeling it.

About a week later, he sent me a DM that said, “I’ve been admiring you for a while. Do you mind if I take you out to dinner?”  I had been single for about three years, so I waited about an hour before answering him and prayed on it. I decided one date would not hurt; it was just a date. I took a leap of faith and said yes.

When the time came for our date, I was about to change my mind. I tried to think of an excuse, like I didn’t have a babysitter. I spoke with my mom and my best friend Alexis, and they pushed me to go.

When I got my first glimpse of him, I was kind of shocked because he looked exactly like his Instagram pictures. Lately, a lot of people don’t look like their pictures on social media. He was muscular, tall, dark and very handsome. I believe that he was the first man who ever opened my door and gave me flowers. It was like something out of a movie. He made a very good impression on me.

We had reservations for Ruth’s Chris Steakhouse, but when we got there, they were packed. They said we had to wait for an additional two hours. We sat there trying to figure out another place to go. We decided on TGI Fridays. There was a movie theater across the street, so it worked out perfectly. We would be able to eat and make the movie on time.

We were initially supposed to end our date with the movie, but we enjoyed each other so much we ended up going to Dave and Busters. We stayed there until about 2:30 a.m. Then he took me home and we said our goodbyes. He was such a gentleman. I wasn’t ready to go home yet but wanted to end it on a light note. He texted me through the rest of the night. I was okay with that. I had really enjoyed being with him.

The next day we went to downtown Greenville. We walked around the waterfalls, fed the ducks and had ice cream. We have been together every weekend since.

It took about two weeks for me to decide that Troy was the one for me. That surprised me because I’m hard to crack. It was the conversations that we had every day. His conversations were totally different from any other guy that I had met. He was always talking about family or about God. He was very family oriented and seemed very eager to meet my kids. He was always interested in what they were doing and if they had a good day. He wanted a family, and we shared the same religion. I go off energy, and his energy matched mine.

We lived about ten minutes apart. When I would get off from work, or was on my lunch break, he would bring me food and flowers. Since our first date, if we weren’t together, we were talking on the phone. He didn’t know it at the time, but after about three weeks I made a secret Pinterest board of my wedding. I had it all planned out. He was going to be my husband. I was thinking it and manifesting it. Hearing how he was talking, he wanted the same thing. I just had everything planned out already in my head.

Troy says I reminded him of his mom. She was a working, single mother as well. She was a hard worker, as was I. When we met, I was in school, working and caring for the kids. He said that I showed effort. Although I had a lot on my plate, I made the effort to still communicate with him and show concern about how he was feeling. That is what showed him that I was the one for him.

Troy proposed to me in March 2021. He had already asked my mom months prior and told her the date that he planned to propose and everything. I’m not normally a girly girl. I don’t like getting my nails done or anything, so when my mom started pushing me to get them done, I thought it was kind of weird. She told me to treat myself and just get your nails done for the weekend.

That Friday, she offered to keep the kids. I thought maybe she just wanted us to have some alone time. It was something that we had not done for about two months, because I was still in school, and he had just started a new job. So, it was much needed.

He planned an evening out at Rick Erwin’s Restaurant in downtown Greenville. While we were eating, he began asking me these weird questions. He said, “Hey, do you see yourself spending the rest of your life with me?” I wondered why he would ask me that, but said “Yes, of course.” Then he asked me, “You know, when times get rough, would you still stay with me?” I was like, “Okay, what did you do?” He said, I didn’t do anything. I am just making conversation.”  My answer to all his questions was yes.

Soon it was dessert time. I normally don’t get dessert, but Troy pushed me. He said, “I heard that they have great chocolate cake. You need to at least try it.” So, I ordered the cake. We were talking when he held my hand and said, “I’m asking you this question again. Do you see yourself spending the rest of your life with me?” I said, “Yes, Troy. You already asked me that.”  All of a sudden, he cut his eye to the right, and I saw him kneeling down on his knee. Then I saw the waitress was coming out with sparklers and the cake. Another waitress came out with her phone and started recording us. I was confused about what was going on. I was thinking, “It’s not my birthday.” That’s when the waitress put the plate in front of me. It said, “Will you marry me?” and a ring was lying beside the piece of chocolate cake. That’s when Troy popped the question.

I started crying. I think it is every girl’s dream to get married. But being a single mother with no one to help me, I had almost given up hope. I had broached the subject with Troy a few times. I was like, “Hey, you know, we’re basically living together. We now have a new baby.” My kids were calling him dad because they didn’t have their father. So basically, I was a single mother on my own. I would ask, “When are we going to get married?” His answer was always, “One day, when the time is right.” So, I discussed it, and he kind of blew it off. I was thinking, “It ain’t gonna happen.” Then Troy showed up, like Prince Charming, and he did everything that I was not used to. I was in shock and happy because I knew he was the one for me.

Wedding planning was easy because I had started planning it three weeks after we met. I had a whole vision board showing how I wanted my wedding to be. I knew who I wanted my bridesmaids to be and what my colors would be. I knew almost everything. The only thing I had not planned was the venue. That took about two months to find.

The venue we chose was all-inclusive, so they did the decor, provided the food, and had a coordinator that came with the venue. Her name was Colleen, and she was amazing. I sent her my Pinterest board, and she put her ideas to work to make it happen.

The toughest part of wedding planning was probably coordinating with my bridesmaids. With so many different personalities, trying to get everybody together and agreeing was difficult at times. There were also compromises that I made with Troy.

The wedding was amazing. I have social anxiety, so interacting with that many people for hours made me nervous. But once I was in my dress, it got easier. When I was walking down the aisle and saw Troy, it was like nobody else existed. My eyes stayed on him, and that’s what made it much easier for me.

We had a traditional wedding with about 150 guests. We exchanged the traditional vows before jumping the broom. We worked together for two nights to make the broom. It was so beautiful.

My most memorable moment was walking down the aisle and seeing Troy. The way he looked at me was like I was everything, which was exactly what I was going for. Troy’s most memorable moment was seeing our eleven-year-old son in the back crying. We also loved seeing our three-year-old, who was the flower girl. Instead of dropping the flowers one at a time, she threw the entire basket. That was so funny. Being there with our family and friends was the best part.

Our honeymoon was amazing. We went to Montego Bay, Jamaica. Our room was decorated so romantically. It was connected to a private pool. The resort staff was great.

We went ziplining and rode ATV’s. Troy arranged a private dinner on the beach one evening. It was a special surprise for me. He was holding my hand as we walked along the beach when we found candles set up on the walkway. There was a private table with all type of flowers, overlooking the beach. They had romantic music playing. Dinner was lobster and jerk chicken, rice and peas. There was a private butler going back and forth with whatever drinks we wanted. And of course, we had our own personalized champagne. He did an amazing job setting that up.