This weekend: a live art show to benefit local artists and 100 Black Men 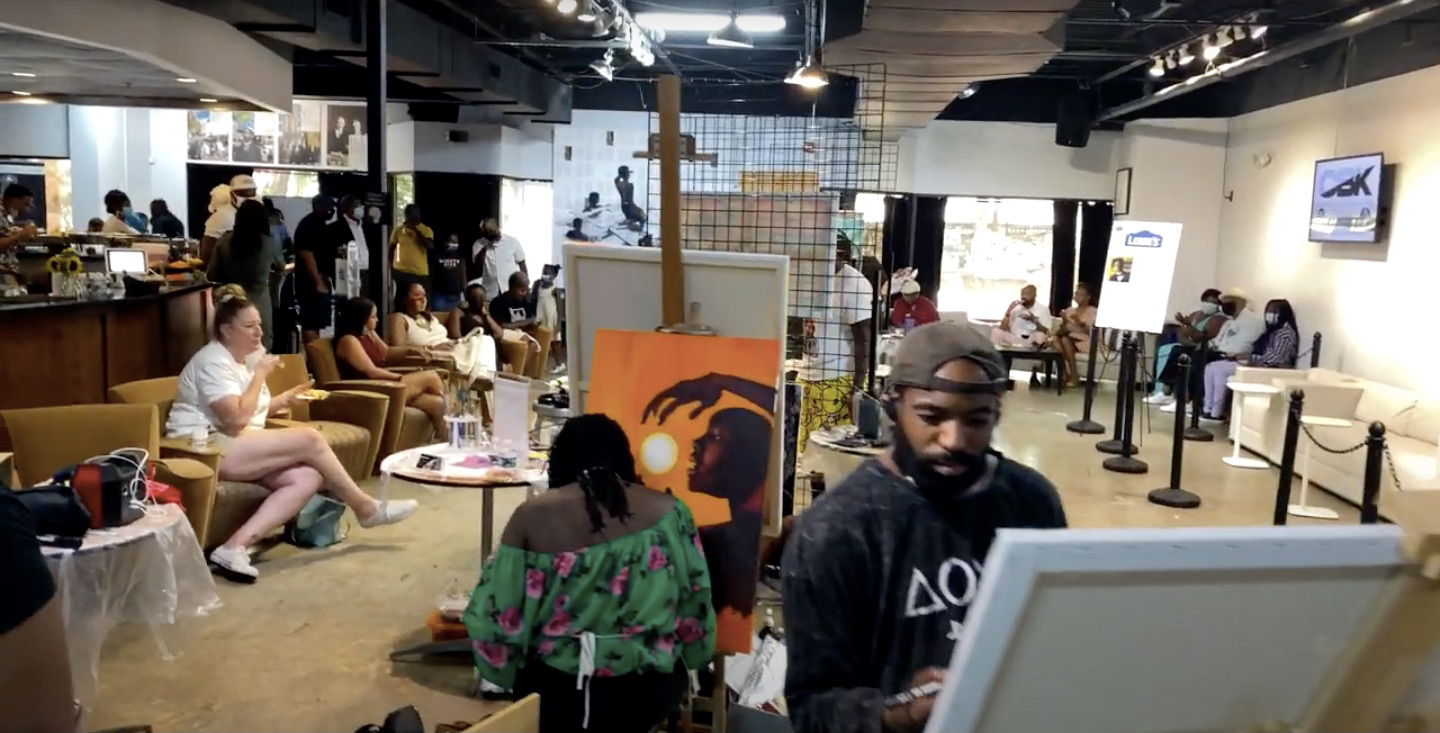 This weekend: a live art show to benefit local artists and 100 Black Men


Duvale Murchison worked as a DJ for 19 years in Lansing, Michigan, hosting and promoting more than 200 events, from wedding receptions to parties and more.

He stopped DJing in 2000, but hosting events has stayed in his blood.

“The whole notion of giving people a good time is what I’m about,” he recently told QCity Metro.

On Sunday, Murchison, in partnership with 100 Black Men of Greater Charlotte, will host QC Live Art Experience 2, a fundraising event to benefit Black youth in the community.

Located at Studio 229 on Brevard, the event will feature 13 local artists, each given three hours to create an original piece.

While the artists are painting, guests can enjoy music, food and beverages.

Each piece of art created at the event will be auctioned off at the end of the evening, and all proceeds will go to the artist and to the 100 Black Men’s youth program.

After moving to Charlotte in 2015, Murchison, 58, decided to join the greater Charlotte chapter of 100 Black Men, a nationwide organization with a mission to mentor young Black boys to become men.

“I joined the organization because I wanted to be a part of a Black men’s group that is doing something extremely positive and helpful in the community,” he said.

Murchison came up with the live art event idea when he was in Michigan and decided to pitch the concept to 100 Black Men as a fundraiser in 2018.

While the organization was interested in the event, they weren’t ready to host any fundraisers at the time, he said.

“I always thought about doing (the event), but I didn’t know when and where, so I kept it on the back burner,” he said.

In 2020, the chapter president finally offered Murchison a chance to host his event, but after weeks of planning, Covid forced its cancellation.

“I was obviously disappointed…” he recalled.

Finally, about three months ago, Murchison got his chance.

More than 100 people attended that first event, also at Studio 229 on Brevard, and 12 artists participated. The event raised at least $4,200 in art sales and ticket revenue, he said.

Murchison said some people reached out to him after that initial event to say how much they enjoyed themselves and to inquire about the next installment.

“I’m just very humbled and grateful that the community has embraced this event and have a will to support it,” he said.

Encouraged by the positive feedback, Murchison and 100 Black Men began planning for their second event.

In addition to helping 100 Black Men, Murchison said he wants to ensure that participating artists also reap some benefit. (Eighty percent of all proceeds is split between the artists, he said.)

“I love artists, and I want to see them do well and succeed,” he said.

The share of the proceeds that goes to 100 Black Men is used to advance youth programs and activities such as tutoring, scholarships and field trips.

Murchison said he wants guests to not only support the local artists and youth but to also have a good time.

“It’s a festival time close to the holidays, and people get the chance to do something,” he said.

The event starts at 1 p.m. General admission is $15. Tickets can be purchased through EventBrite.