This weekend: How ‘colorism’ shapes our view of one another 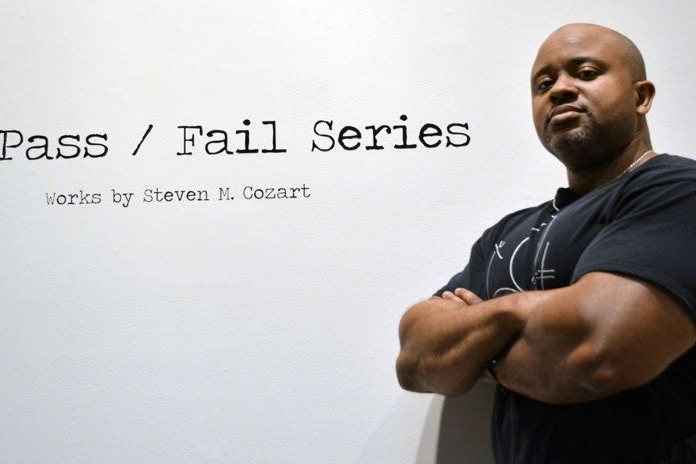 This weekend: How ‘colorism’ shapes our view of one another


Steven Cozart has loved creating portraits and figurative art since his early years as an artist in the 1990s. In 2013, he began using his artwork to explore colorism, a social phenomenon not often discussed in polite Black company.

An online dictionary defines colorism as “prejudice or discrimination against individuals with a dark skin tone, typically among people of the same ethnic or racial group.”

“I think any black person in America has dealt with (colorism) on some level,” the 49-year-old Durham native told QCity Metro. “For me,  it was just something that I had seen on and off through the years.”

At the Harvey B. Gantt Center on Saturday, Cozart will host the “Pass/Fail Series,” an art exhibition and talkback that explores this racially sensitive topic. (The exhibition includes a collection of portraits that are tellingly displayed on brown paper bag canvases.)

Cozart hosted his first Pass/Fail exhibition in 2014. He said the project was initially supposed to last a year, but it ultimately became an ongoing series.

“…I ended up finding out that there’s a lot of levels to colorism,” he said.

Cozart continued to enhance his exhibitions by going in-depth on the other layers of colorism that include texturism and featurism.

While colorism has typically been associated with individuals with darker skin tone, Cozart said it also gives a “weak” stereotype on those with a lighter complexion.

Each show has ended with an audience talkback. Some of those discussions have been calm, he said; others have been heated.

“Sometimes there are tense moments, but I think that has to happen in conversation,” he said. “You have to let people say what they need to say.”

After being one of 25 featured artist in the Gantt Center’s Visual Vanguard exhibition in August, he was given the opportunity to bring his series to Charlotte.

Afeni Grace, public programs manager at the Gantt Center, said Cozart’s exhibition allows the center to fulfill a key part of its mission.

“Not only do we present arts and culture, but we also talk about important issues that affect our community,” she said.

Cozart said colorism is as prevalent today as it ever was, and he hopes the Pass/Fall series will bring the issue to light.

The Pass/Fail exhibition and discussion is scheduled from 3 p.m. to 5 p.m. Guests can register for free via EventBrite.