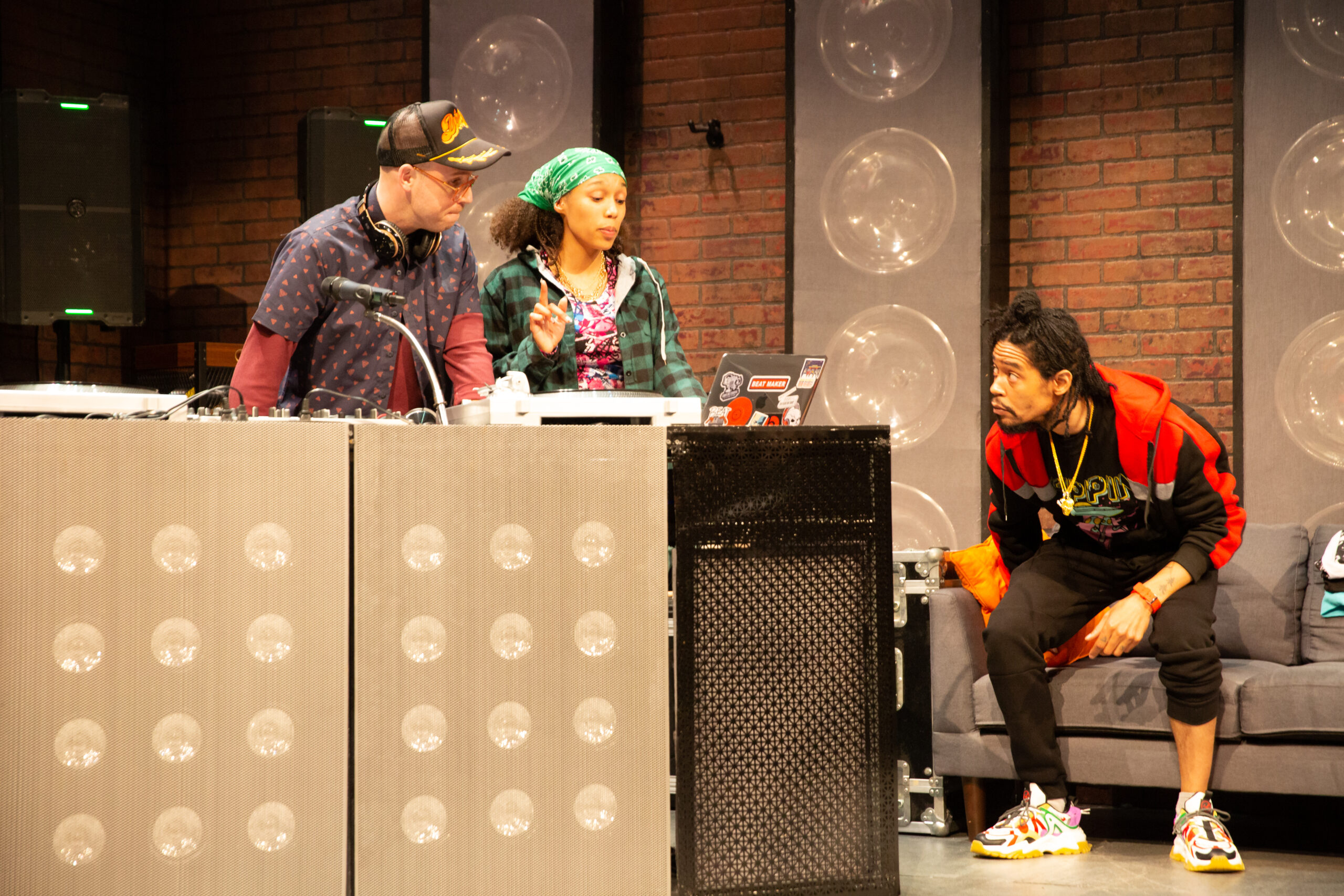 While preparing for the performance of a lifetime, suddenly a fatal police shooting of an unarmed Black man causes dissension among the tight trio. In their upcoming performance, they wrestle with how best to address the shooting or if they should discuss it at all.

On the night of their biggest performance ever, a sudden decision made by one of the members causes group tensions to rise quick, fast, and in a hurry.

Pinnacle, Peep-One, and Verb comprise the entire cast, keeping the play’s story tight-knit and rounded as it explores themes of race, gender, friendship and social justice.

Despite the heavy topics, the show has moments of levity, humor, and above all, good music.

One of the more enjoyable aspects of “Hype Man” is how dynamic the characters are as a trio, on their own or one-on-one.

Peep-one, Verb, and Pinnacle each have a monologue that tells the audience more about what motivates them and watching them interact is a subtle treat all to itself.

Audiences will see childhood friends Pinnacle and Verb navigate political and interpersonal conflict and their ambitions.

Verb and Peep-One have in-depth discussions about racism and sexism, and Peep-One and Pinnacle juggle balancing friendships and their careers.

Each issue has ample time to be explored on stage without feeling overwhelming; which was nice to witness given the diversity of viewpoints and lived experiences.

“I think it will challenge a lot of what people believe, and I’m excited to see or hear the conversations people have,” DeCarlos told QCity Metro.

“The play reminds me that big political disagreements look different when they’re local – when it’s just between you and a friend,” Kimmel added.

In addition to the play’s themes, the technical aspect is enjoyable as well. While the stage is small, the lighting and special effects make for a fun and engaging set.

The wardrobe also helped set the tone and showed the characters in a fun and recognizable way. However, it’s not the clothing that set them apart on stage, it’s the characters.

Director Keith Bolden told QCity Metro how, when working with artists from different backgrounds, he emphasizes helping them identify and get past obstacles they may come across while performing.

Verb, Peep-One and Pinnacle all move and talk in distinctive ways. Watching Shephard’s performance as Peep-one felt like being at a real DJ show.

Shepherd, who danced before getting into acting, told QCity Metro how she tries to discover pieces of herself to infuse into her roles.

“I’m not a DJ. I researched until I couldn’t research anymore,” she added.

The play is 90 minutes long and consists of six long scenes, something that playwright Idris Goodwin is proud of.

“I wanted to write a play with really long scenes, there are only about six of them in the play,” Goodwin told QCity Metro. “The play examines six moments in the lives of these people.”

Goodwin, a Detroit, Michigan native, wrote the play in 2015 amid the political divide surrounding Black Lives Matter and Obama’s presidency.

The play premiered in Boston and has since run in New York, Louisville, Los Angeles and other cities.

Goodwin said he’s always written what he knows and that his writing provides different perspectives and creates dialogue.

He said he thought having the hype man be Black and the frontman be White would be an interesting dynamic as it represented a White rapper being “cosigned” by a Black artist.

Additionally, Pinnacle being the group’s frontman represented the role of White allies willing to speak up for people of color, according to Goodwin.

The Actors of Charlotte theater acquired the play in 2019 but due to the pandemic, the show was canceled.

Managing Director Laura Rice told QCity Metro the theater was glad to be able to put on the show as it sparks important conversation, something the theater is passionate about.

While previous plays have explored other themes of race and social justice, this is the first time the Actors Theater of Charlotte has put on a play that addresses police brutality.

“It speaks to Charlotte and the nation as a whole,” said Rice. “Those are the stories we’re interested in telling.”

Hype Man is running now through May 7; here’s where you can grab tickets.