When Covid-19 threatened her laundry business, a local woman saw a chance to innovate 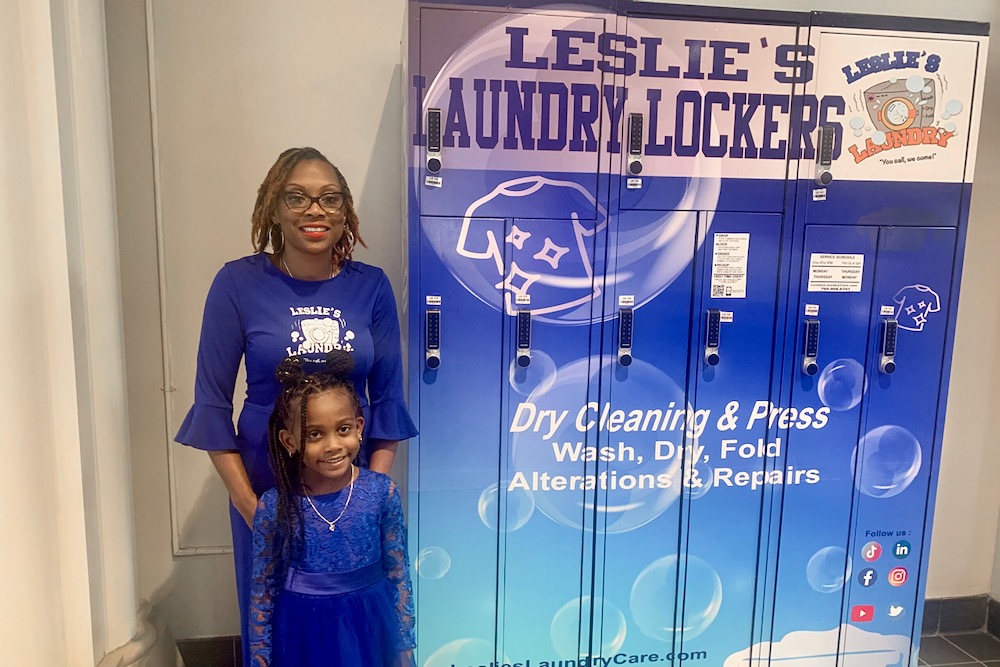 When Covid-19 threatened her laundry business, a local woman saw a chance to innovate


When Domonique Boone was asked to wash her mother’s laundry after her mother’s washing machine went out, she had no idea that simple chore, in 2017, would lead her down a path to entrepreneurship.

“As I was washing and folding my mom’s laundry, I thought about (what) if I wasn’t there; is there any service that would have been able to help her?” the 31-year old Buffalo, N.Y., native recalled.

Today, Boone is the owner of Leslie’s Laundry Care, a business she founded that same year as a pick-up service. At first it was just a side hustle, she said, but when the Covid-19 pandemic hit in 2020 and Boone lost her regular job, she decided to go full-time with her laundry business.

Last week, Boone announced a new service — a bank of self-service lockers inside Carolina Place Mall where customers can drop off clothing items to be washed, pressed, dry cleaned, repaired or altered. (The blue-and-white lockers are near the mall entrance closest to Barnes & Noble bookstore.)

Laundry lockers aren’t a new concept, but Boone believes hers may be the first in the Charlotte region.

Boone’s business expansion is a story of perseverance.

When Covid hit, her pick-up business was cut in half.

“We barely had customers, because everybody was staying at home, doing their own laundry and being very cost-efficient,” she said.

When business began to pick back up, many customers had safety concerns and asked about contactless options. Boone said that after doing some research, she found examples of laundry lockers in other states.

“I saw it as a better way to get closer to my customers so they could have a drop-off and pick-up location,” she said.

In February, she earned her MBE certification from Carolinas-Virginia Minorities Suppliers Development Council and purchased a set of lockers to customize.

Boone reached out to Carolina Place Mall, a shopping center that partners with the council, to see if she could set up her new business within the mall. They accepted her request and her lockers went up on November 8.

With a QR Code they scan with their phones, customers can create an account, track their laundry, store payment information and earn loyalty points. Washing and folding costs $3 per pound; dry cleaning is priced per garment.

Boone continues to offer her pick-up and drop-off options throughout Charlotte, Rock Hill and Fort Mill.

As a private company, Boone declined to discuss financials, but she said the business is gaining about 9 new customers a day.

Before the pandemic, she said, the company used her own commercial machines to wash and dry clothes, but due to Covid concerns, that work is now outsourced to other local businesses.

Boone said that while her target audience is local families, she’s looking to add more commercial work. She currently contracts with UNC Charlotte’s housing and residential life for Covid-19 sanitation. She said she also recently signed on with Belk to wash and press clothing items used in photoshoots.

“Those large corporations are the goal for Leslie’s Laundry Care,” she said.

Aside from making money, Boone said she also wants to use her business to help others, so last summer, she launched Leslie’s Laundry Care Foundation, a nonprofit that donates clean, gently-used clothes to help the homeless.

Even Boone’s decision to name the business after her now-6-year-old daughter was done with purpose: said wants to emphasize to her daughter the importance of building generational wealth. Someday, Boone said, she hopes her daughter will run the business.

“It is very important, because I want to be a role model to her, and I want her to see the ends and out of the business,” she said.

Boone said one of her goals is to franchise her laundry lockers across the city and surrounding area.

“We are looking to be in everyday places like grocery stores, …gas stations, wherever you can place lockers, we’re looking to do that,” she said.