Who will become the Panthers head coach this offseason? 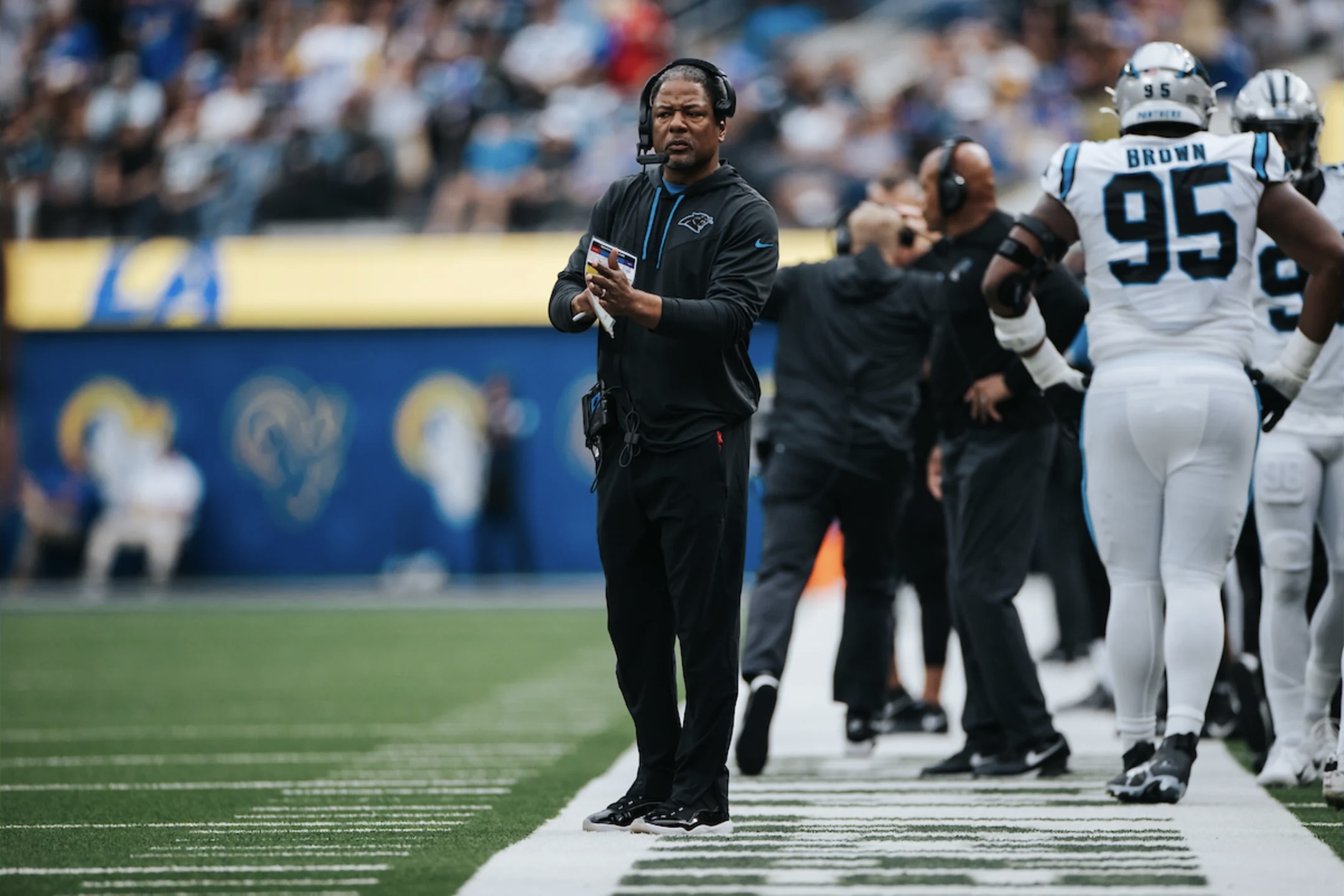 Who will become the Panthers head coach this offseason?


The Carolina Panthers will have some big decisions to make.

The Matt Rhule era in Carolina may be over, but the team’s struggles will continue into the offseason. In under three years with Rhule, the Panthers went a dismal 11-27.

Wilks lost his first game against the Rams on Sunday, but team owner David Tepper has said that if Wilks does well, he’ll have a chance to be considered as a long-term option this offseason.

If the team goes in a different direction, this will be the Panthers’ eighth head coach since becoming a franchise in 1995.

Tepper will have a long list of coaches to evaluate, from young hotshot coordinators to former head coaches looking for a second chance. A promotion could also come from within.

Here are 10 potential head coach hires or promotions the Panthers could make:

Wilks, with 14 years of NFL coaching experience, is a well-respected defensive mind across the league and, of all the potential hires on this list, has the most history in the Panthers’ locker room.

His first stint with the team was in 2012. He was hired as the defensive backs coach by then-head coach Ron Rivera. Wilks was promoted to assistant head coach of the Panthers during their Super Bowl run in 2015.

In 2017, he was promoted to defensive coordinator,  and his defense was ranked near the top of the league.

Wilks was a hot commodity  that offseason and was hired as head coach of the Arizona Cardinals, but his time with the team wasn’t ideal.

In 2018, his lone season with the Cardinals, he finished with a league-worst 3-13 before being fired.

Some believe that Wilks was used as a scapegoat by Cardinals ownership, after failing to produce wins with a struggling rookie quarterback and very little talent on their roster.

His successor, Kliff Kingsbury, finished with only two more wins the following season but still coaches the team to this day.

Wilks returned to the Panthers this offseason after being defensive coordinator for the Cleveland Browns (2019) and the University of Missouri (2021).

If he can show progress with the team, he could have a legit shot at the opportunity to lead a more talented Panthers roster.

Panther fans haven’t been too happy about McAdoo’s play calling as offensive coordinator this season, but it’s unclear whether he deserves full blame for the lack of production.

The Panthers have carouselled through eight quarterbacks since 2019.

McAdoo has been known as a “quarterback guru”, working with the likes of Eli Manning and Aaron Rodgers – each of whom had career-best seasons when he was their quarterback coach.

The Panthers have tried to recycle the careers of quarterbacks Baker Mayfield and Sam Darnold, but the two continue to perform below expectations for players who went first and third, respectively, in the 2018 NFL Draft.

McAdoo, in an interview with the New York Post, said he didn’t think Mayfield and Darnold were worth their high selections.

Mayfield was the sixth-rated signal caller. McAdoo said Darnold had potential but wasn’t confident in his ability as a passer.

McAdoo had Josh Allen – taken by the Bills at No. 7 – as his top rated quarterback. Lamar Jackson, who was taken at 32 by the Raven, was ranked second on McAdoo’s quarterback ranking.

The top-two on McAdoo’s list are considered among the best quarterbacks in the league today, while the Panthers’ quarterbacks might be a season away from being out of the league.

If given the opportunity to coach the team, McAdoo could find his dream signal-caller in the upcoming draft (or go with Matt Corral) to make up for the team’s current offensive woes.

Pep Hamilton, 48, has been in the league in some offensive coaching capacity since 2003.

Previously, he called the occasional play during the Hue Jackson tenure in Cleveland and as Andrew Luck’s offensive coordinator in Indianapolis.

The Charlotte native has been credited for the development of Los Angeles Chargers quarterback Justin Herbert.

The Panthers actually reached out to Hamilton last year for their offensive coordinator vacancy, but he declined their offer to work with the Texans under Lovie Smith.

The chance to become the lead man in his hometown could be a deciding factor for Hamilton.

Dorsey is all too familiar with the Panthers, having served as the team’s quarterbacks coach from 2013 to 2017.

Dorsey was involved in some of the best years of Cam Newton’s career and is having similar success with MVP candidate Josh Allen in Buffalo.

The Bills have arguably the best offense in the league. Carolina has as many weapons as the Bills but can’t seem to put together points.

Dorsey could look to reunite with his former team to provide a much-needed offensive spark.

The Panthers got a first-hand glimpse of Ryan’s coaching style when they faced the 49ers on Oct.9.

His defense allowed Carolina just one touchdown in a dominant 37-15 victory.

Ryans, who played 10 NFL seasons as a linebacker from 2006-15, began his coaching career in 2017 as a 49ers defensive quality control coach.

He was promoted to inside linebackers coach the next year and became the team’s defensive coordinator in 2021 after Robert Saleh left to be the head coach of the New York Jets.

In Ryans’ first year, San Francisco’s defense ranked third in the league in yards allowed per game (310.0) and 10th in points allowed per contest (21.5).

Ryans interviewed for head coaching jobs this last offseason, but ultimately ended up staying with the team.

The team’s defense has continued to dominate this season, improving Ryans’ chances of becoming a head coach.

Jerod Mayo – inside linebacker coach for the New England Patriots

Jerod Mayo played seven years in the league with the New England Patriots.

After being drafted as the 10th overall pick in 2008 out of Tennessee, Mayo has earned respect for his work ethic and communication skills – traits that have remained in his coaching career.

He became the inside linebackers coach with the Patriots in 2019 and helped rejuvenate the career of eight-year veteran Dont’a Hightower.

Hightower finished the year with 71 tackles, five sacks and a second career Pro Bowl nod. The defense finished No. 1 in the NFL in total defense.

Mayo, 36, will undoubtedly see another offseason with coaching interviews just for being an assistant coach under Bill Belichick.

The Panthers’ defense is already its strong suit. Mayo would add to that success and possibly help Shaq Thompson and Frankie Luvu reach their first Pro Bowl.

Frazier has been a coach in the NFL since 1999 but has had only one head coaching opportunity. In 2010, he took over as interim head coach of the Minnesota Vikings after Brad Childress’ midseason termination.

The former defensive coordinator remained in the role the following offseason, but it wasn’t until his second season that the team made the playoffs with a 10-6 record.

The team struggled the following year and Frazier was fired after going 5–10–1 in 2013.

Frazier spent the next seasons as the defensive coordinator for the Tampa Bay Buccaneers and as defensive back coach for the Baltimore Ravens.

Since becoming Buffalo’s defensive coordinator in 2017, Frazier has led dominant defenses, finishing in the top three in three of the last four seasons.

The unit was the top-ranked total defense in 2021.

Frazier, 63, interviewed with several teams that have had vacancies, including the Dolphins, Bears, and Giants last offseason.

Rhule’s lack of NFL experience could lead Tepper to want a more experienced NFL coach. Caldwell, having over 15 years as a coach in the league, might make sense.

In 2014, Caldwell was hired by the Detroit Lions who had only won 11 games in the previous two seasons. He led that team to an 11-5 record and playoff appearance.

Caldwell struggled the following season with a 7-9 record. The team would improve with 9-7 in the next two seasons, but after a management change, Caldwell was fired in 2017.

He joined the Miami Dolphins coaching staff in 2019 but left the team due to health issues at the time.

In January 2022, Caldwell, interviewed for then-vacant Jacksonville Jaguars and Chicago Bears head coaching positions, but wasn’t hired by either team.

Despite his 62-50 record, he hasn’t been able to find another coaching gig. A veteran leader like Caldwell could bring instant stability to the team.

Sean Payton will likely be a top name in head coaching searches across the league this offseason.

The recently retired head coach led the Saints to seven NFC South championships and a Super Bowl over a 15- year tenure.

Payton is currently contracted by the Saints through the 2024 season, so it would be hard to see the Saints trade their former coach to a division rival, but it isn’t impossible.

Everything has a price, and Tepper, the league’s richest owner, just might be willing to pay a hefty fee for the Super Bowl-winning coach.

Payton has said that he is willing to come out of retirement for the right situation. He has even called Carolina’s head- coaching job an “attractive” destination.

While the chances may be slim, it’s definitely worth the shot.

Flores, 41, has been in hot water with NFL owners after suing the league for racial discrimination in its hiring practices. However, his track record as a coach can’t be denied.

Flores was a longtime assistant under the Patriots’ Bill Belichick until becoming the head coach of the Miami Dolphins in 2019.

Although the team never made the playoffs, Flores led Miami to consecutive winning seasons in 2020 and 2021, the franchise’s first since 2003.

Flores was fired after conflicts with management, leading to his lawsuit.

NFL owners might be hesitant to give Flores a head coaching gig, but Tepper’s ties to the Pittsburgh Steelers could make him a note-worthy candidate.

The Rooney family, the majority owner of the Steelers, has been known to provide opportunities for minority head coaches.

Flores would not only be a diverse hire, but he would bring a much-needed culture change to the Panthers locker room.